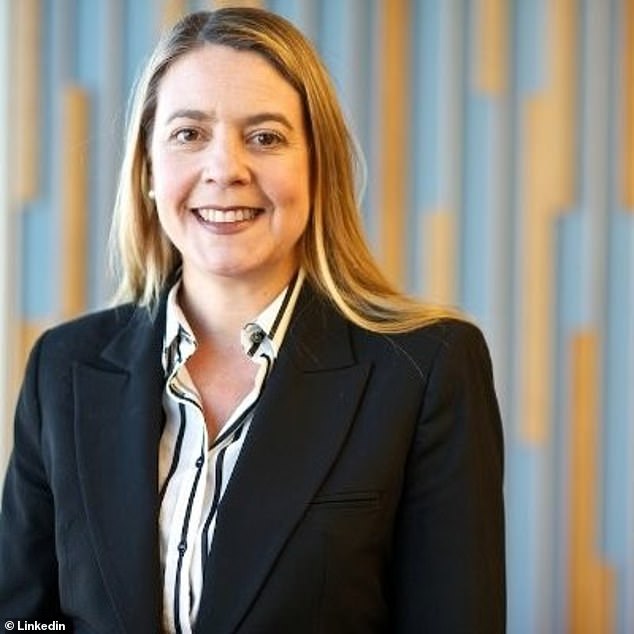 Jenny West boasts a stellar career in the private and public sector but she is now best known for a job she didn’t get – despite being offered it.

After being told she had secured a $500,000 trade ambassador role in New York last August, Ms West saw it ripped away weeks later when retiring NSW deputy premier John Barilaro changed the selection process, allowing him to eventually claim the position for himself.

Ms West, who was deputy secretary of Investment NSW, was not pleased about the backflip, leading to an ‘irreconcilable’ situation, according the senior bureaucrat who had to break the bad news to her in September.

Jenny West (pictured), was ‘extremely upset’ when she learnt the plum trade ambassador role she had won through an interview process was to be taken off her due to a ministerial decision that eventually led to the job being given to former NSW deputy premier John Barilaro

At a parliamentary inquiry on Wednesday that will examine the debacle, trade department secretary Amy Brown said Ms West ‘was extremely upset about that, understandably so’.

In the days after her appointment was blocked, Ms West met with NSW’s top bureaucrat Michael Coutts-Trotter to express her concerns about what happened, the Sydney Morning Herald reported.

Ms West, here seen addressing Indian students in her capacity as deputy secretary of Investment NSW was described as an ’eminently qualified’ candidate for the New York job

Mr Coutts-Trotter, who is secretary of the Department of Premier and Cabinet, was given a 45-page report by Ms West outlining her concerns over what transpired.

Ms West has now left the public service with an undisclosed payout.

The New York Senior Trade and Investment Commissioner would have capped a CV bristling with achievement for Ms West.

She entered the NSW public service after being head of trade and investment at federal agency Austrade, where she led digital innovation efforts.

Mr Barilaro, who was then-NSW trade minister, intervened to change the process for hiring the state’s trade ambassador to the US and eventually claimed the job himself

Her private sector experience includes four years as the NSW/ACT regional director for Telstra, where she was in charge of 130 retail stores and oversaw the NBN rollout.

In her seven years at Westpac, she headed the migrant and expatriate banking division, and was also general manager of the Sydney CBD operations.

In 2013 she won a Westpac ‘Women of Influence’ Award for business outcomes.

Ms West is also listed as a UTS Business School Industry Advisory Board member and a governor for the American Chamber of Commerce in Australia.

Labor’s Deputy Leader Prue Car told the parliamentary inquiry that a highly accomplished woman had been brutally passed over for a former member of the government.

‘We now know that the very eminently qualified Jenny West was dumped by this government, given a taxpayer‑funded settlement—because she was offered a job that was then taken away from her,’ Ms Car said.

The NSW Senior Trade and Investment Commissioner post in New York comes with a $487,000 salary plus a $16,000 cost of living allowance.

It was created along with four other similar roles by then-NSW trade minister John Barilaro in November 2020.

Then-deputy secretary of Investment NSW Jenny West was told she had won the New York job in August after beating out three other candidates from a select shortlist of interviewees.

Mr Barilaro requested changes to the recruitment process in late September which required it to be signed off by state cabinet, although this has not occurred.

This led to the verbal offer to offered to Ms West being withdrawn.

The relationship between Ms West and Investment NSW then became ‘irreconcilable’.

The job was advertised in a process handled by Investment NSW and global recruiting company.

Mr Barilaro was verbally offered the job in May, signed a three-year contract in June and is due to begin the role in July.

He will be owed a week’s salary if he is removed inside his six-month probationary period. After that he could be owed the wages due for the full three-year contract.

Nearly $1 million was spent refurbishing part of the Australian consulate in New York for Mr Barilaro to occupy.

She said she was not aware whether Mr Barilaro ever asked his replacement as trade minister, Stuart Ayres, to give him the job.

Ms Brown expressed concerns last year in internal communications that Mr Barilaro’s office would try to veto her picks for the role.

She said a staffer on temporary secondment had misunderstood when she sent an email, since resurfaced, requesting the premier’s approval for two other commissioner appointments despite the recruitment being an apolitical process.

Ms Brown said Ms West was an ‘excellent candidate’ who had exceeded all the criteria to win the New York job after beating out a select shortlist of four people interviewed.

However, all appointments had to be frozen after a request on October 3 from Mr Barilaro’s office that commissioner positions be moved from being an in-house departmental decision to one requiring cabinet approval.

Despite cabinet agreeing to draft legislation to this effect, the New York job has been given without ministerial signing off, unlike other similar roles.

The job was then re-advertised in December and the process was handled by Investment NSW and a global recruiting company with Mr Barilaro being announced as the successful candidate earlier this month.

NSW Premier Dominic Perrottet who called the appointment an internal public service has established an independent inquiry separate to the parliamentary one into the hiring process.

Mr Barilaro retired from politics on October 4 just days after Gladys Berejiklian sensationally quit as premier after the state’s anti-corruption watchdog, the Independent Commission Against Corruption, announced it was investigating her.

He signed a three-year contract in June to take up the position of New York trade commissioner and is due to begin the role in July.