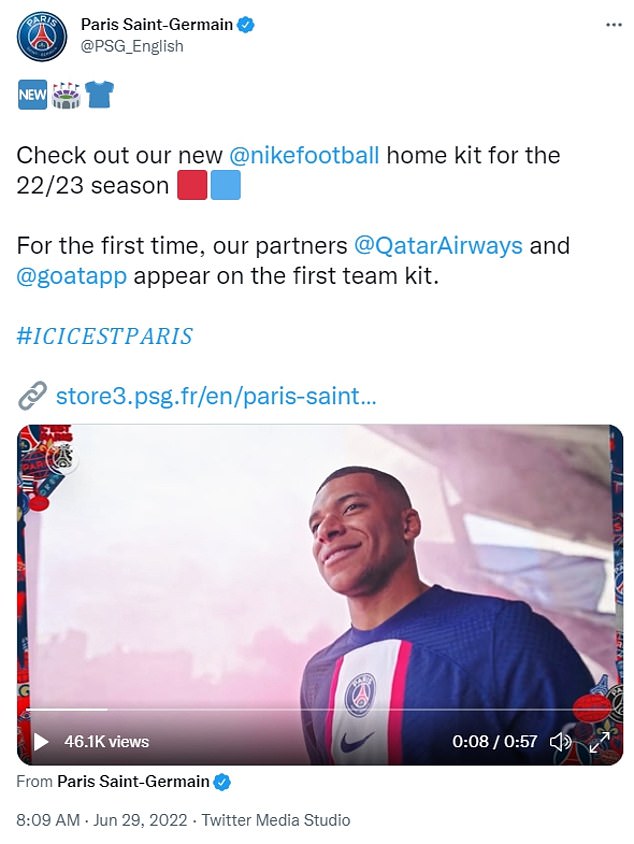 Paris Saint-Germain launched their new kit for the 2022-23 season, with Kylian Mbappe central to the campaign after making a U-turn about his future and choosing to stay with the club.

Neymar and Lionel Messi are among the other stars modelling the shirt in the dramatic launch video.

The new design is the first time PSG’s first-team kits have featured their partners Qatar Airways as the primary sponsor, and the fashion app GOAT as a logo on the sleeve.

The club described the new home shirt as ‘a Parisian kit that combines tradition and modernity’.

A video marking the launch released on Twitter features the marquee players showcasing the outfits in Le Parc des Princes, and alongside colourful flares for a dramatic impact.

The 23-year-old Mbappe is central to the launch campaign, after making a U-turn about his future, and opting to stay with the French club instead of switching to Real Madrid.

In May, he opted to stick with the reigning Ligue 1 champions by signing a three-year deal worth a reported £650,000-a-week.

Neymar also features in the release video, despite reports claiming that he has been told he is ‘not wanted’ at PSG amid a major reshuffle by club president Nasser Al-Khelaifi.

PSG paid a world record £199.8m for the Brazilian five years ago, but he appears to be surplus to requirements for the big-spending French club, and has been linked with several European rivals.

The winger’s expensive wages are thought to be part of the reason why the club want him to leave, although they will also limit the number of options available to him as his next career move.

The dramatic video, which ends on their slogan ‘Ici C’Est Paris’ – or ‘This Is Paris’ – also features star Argentinian playmaker Lionel Messi, and Brazilian defender Marquinhos.

PSG’s bid to retain their Ligue 1 title in this unprecedented World Cup season begins away to Clermont Foot on August 7.