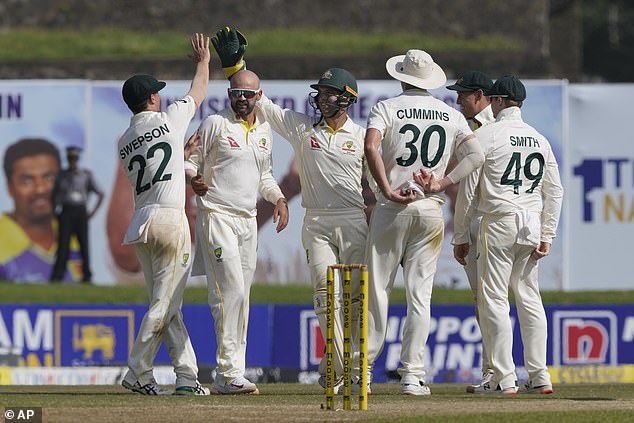 David Warner’s sky-high form in the field continued on Wednesday after the Australia star took an absolute peach in the First Test against Sri Lanka.

With Nathan Lyon already wreaking havoc with the ball, the spin bowler appeared to have trapped Dimuth Karunaratne LBW on Day One in Galle, with Alex Carey behind the stumps appealing vociferously for his dismissal.

With the ball looping in the air, Warner kept his eyes firmly on the prize to spring forwards and catch the ball one-handed.

The ball had in fact struck Karunaratne’s bat before ricocheting off his pad and flying high into the sky, so the 35-year-old’s alertness to pounce was crucial in dismissing the batsman.

At this point, the tourists had their hosts six wickets down for fewer than 100 runs and appeared to be turning up the heat on Sri Lanka in Galle.

Bowler Mitch Swepson came close to achieving every cricketer’s life-long dream in taking a Test hat-trick, but was denied at the last by Ramesh Mendis.

A late Steve Smith run out highlighted Australia’s jitters with the bat in Sri Lanka after Nathan Lyon joined elite company with his 20th five-wicket haul in Test cricket.

Lyon claimed figures of 5-90 to help bowl Sri Lanka out for 212 just after tea on the opening day of the two-Test series, before the tourists went to stumps at 3-98 in Galle.

On the same day Sri Lanka paid tribute to Shane Warner, legspinner Mitchell Swepson also vindicated his selection with a fine 3-55 as he at one stage took two wickets in successive balls.

At that point all was going well for Australia, as David Warner exploded out of the blocks in reply to have them 0-47.

But as is so often the case on the sub-continent, a sting in the tail was still to come.

In a chaotic final hour, Warner was trapped lbw for 25 by Ramesh Mendis, Marnus Labuschagne reverse-swept the spinner straight to gully and Smith was visibly furious after being run out.

Hit on the pads on six, Smith took off after Usman Khawaja appeared to call him through amid an lbw appeal and then hesitated.

Smith turned and dived but was well short of his ground, making clear his frustration clear to Khawaja as he got up and stormed off the ground.

Australia’s situation at stumps could have also been far worse had Niroshan Dickwella not missed a chance to stump Khawaja, who finished the day unbeaten on 47.

But still Wednesday belonged to Lyon, who joined Clarrie Grimmett, Dennis Lillee, Glenn McGrath and Warne as the only Australians to claim 20 five-wicket hauls.

Derided for his inability to take command with his spin in the 2016 series against Sri Lanka, Lyon failed to take a five-wicket haul in the 3-0 flogging then.

He has since spoken about the lessons taken from that, including realising he needed to learn to bowl ugly on the sub-continent with more variations in his release point.

“I’ve learned a lot from my time in the sub-continent but also in Australia about how to bowl off breaks and what is effective,” Lyon said.

“That phrase of bowling ugly is something I refer to myself to make sure I use my variations and bowl at the right speeds.

“I have fallen in love with the shape of off-break bowling in Australia, and coming to the sub-continent is something I need to do to make sure I am getting the best out of myself.”

He claimed the key wicket of Dimuth Karunaratne for 28 just after lunch on Wednesday, drawing his inside edge before David Warner leapt forward to take a one-handed catch at slip.

Angelo Mathews became Lyon’s next victim when he glided him straight to Warner at leg slip, before the offspinner ended a rearguard action from Dickwella (58) to run through the tail early in the final session.

“I was really proud of the way we came back after tea and stuck to our plans,” Lyon said.

“I see this game as being pretty even, so plenty of work to do.”

Swepson would have also walked away happy with his return, after appearing to be at risk of losing his spot following a difficult debut tour of Pakistan.

After taking just two wickets for 266 runs there, Swepson’s first two scalps on Wednesday came with balls Warne would have been proud of.

Both drifted, dipped and turned, allowing them to catch the edges of Dhananjaya de Silva and Dinesh Chandimal.