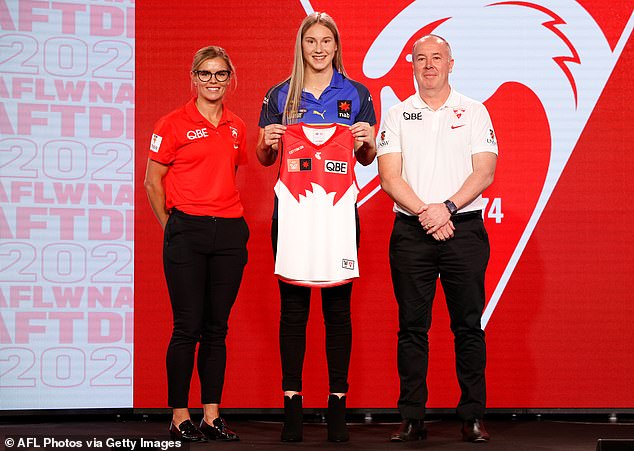 Sydney have pounced on Montana Ham with the AFLW No.1 draft pick after the gun Victorian midfielder shunned clubs in her home state in favour of heading north.

That meant the 18-year-old could only be selected by Sydney or GWS and the Swans didn’t hesitate to select Ham as their first ever draft pick at Marvel Stadium on Wednesday night.

‘Obviously super excited. You’re always nervous right up until your name’s called out,’ Ham said when presented on stage.

‘Massive honour and I’m absolutely thrilled to be going to the Swans.

‘Obviously it’s a big challenge for me but I’m super-excited to be moving to a new city.’

Ham’s decision follows fellow Victorian Charlie Rowbottom’s call last year to nominate for the Queensland draft pool, where she was taken as pick No.1 by Gold Coast.

Elsewhere, Damien Fleming’s daughter Jasmine was selected by Hawthorn with pick No 2

Drafts are still state-based as the AFLW is semi-professional and part-time.

The 2022 first round stretches out to 36 selections due to expansion and priority assistance picks.