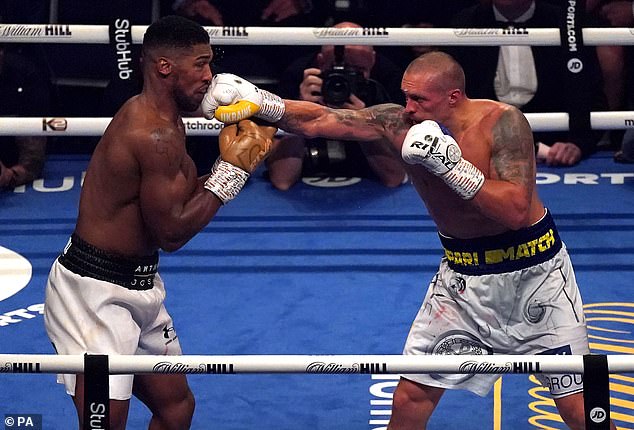 Tyson Fury sends a stark warning to his heavyweight rival Anthony Joshua that Oleksandr Usyk is ‘too quick, smart and cute’ for him… warning the Brit’s new style may actually HELP the Ukrainian in their big Saudi rematch

Tyson Fury is predicting a more convincing defeat for Anthony Joshua when the British star battles Oleksandr Usyk in their rematch later this summer.

The 32-year-old lost his unified heavyweight championship in a surprising defeat to the Ukrainian in September, when he was outpointed by the undefeated Usyk.

Joshua is now looking to prove his doubters wrong and gain revenge on the 35-yea-old champion, when the pair clash on August 20 in Saudi Arabia.

In a bid to change his fortunes, Joshua has swapped trainers ahead of the rematch.

He’s axed former coach Rob McCracken and replaced him with Robert Garcia, in a move thought to be a switch to a more aggressive approach to his second meeting with Usyk.

It’s a tactic that Brit rival Tyson Fury believes may backfire for the 2012 Olympic medalist, and he is forecasting another championship defeat for Joshua.

Speaking to Pitch Boxing the Gypsy King said: ‘I just think Usyk’s too cute for him. Too smart, too quick and a southpaw.

‘I think with Robert Garcia trying to train him to go on the front foot and be aggressive will only enable Usyk to land more often.

‘I just don’t see it but then again, what do I know.

‘In heavyweight boxing it only takes one punch. It wasn’t a complete landslide last time, Usyk had a lot of marks on his face he was cut up.’

Anthony Joshua has swapped trainers ahead of the fight, adding Robert Garcia to his fold

Fury, who last week hit out at Joshua for allegedly backing out of of a fight with him six times and labelled him a ‘prima donna’, continued to lambast his rival by stating he’s too happy to come second place.

The 33-year-old continued by saying: ‘I just think that Usyk’s too good of a boxer for AJ and I don’t think AJ has got the ability to pressurise him for 12 rounds, drag him into a dog fight and knock him out.

‘You have to be an elite, special human being for that and I don’t think Joshua possesses that will to win to do that.

Fury and Joshua are yet to meet each other inside the ring and, after beating Dillian Whyte in April, Fury claimed that the victory would be his last boxing match of his professional career.