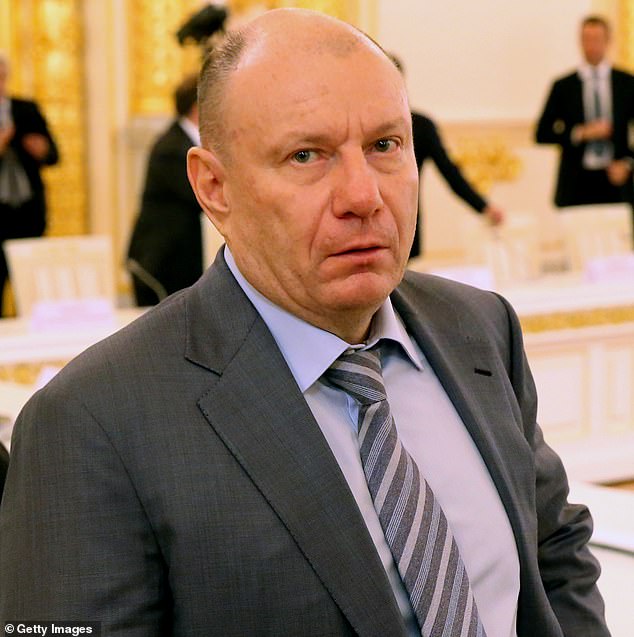 The 61-year-old is worth an estimated £13billion, with the Foreign Office noting how Mr Potanin’s wealth is continuing to amass through his support for the Kremlin.

The punitive measures against the billionaire were announced just days after it was revealed Mr Potanin would take a multi-billion pound legal battle with his ex-wife to the UK’s top judges.

In what has become one of the world’s biggest divorce fights, Mr Potanin won permission to launch a Supreme Court appeal against a previous ruling in favour of his former spouse Natalia Potanina.

It paves the way for one of Putin’s oligarchs being able to continue using British courts, despite being subject to UK sanctions over his support for the Kremlin.

Mr Potanin – who shares Mr Putin’s enthusiasm for ice hockey – is the owner of major conglomerate Interros, which has stakes in stakes in energy, mining, and finance.

He recently acquired Russian bank Rosbank from Societie Generale, after the French bank left the Russian market due to Mr Putin’s invasion of Ukraine.

The Foreign Office has now hit Mr Potanin – who has also recently acquired shares in Tinkoff Bank – with a travel ban and asset freeze due to Rosbank’s prominent role in Russia’s financial services sector.

Vladimir Potanin is worth an estimated £13billion, with the Foreign Office noting how the oligarch’s wealth is continuing to amass through his support for the Kremlin

The 61-year-old is currently engaged in one of the world’s biggest divorce fights with his ex-wife, Natalia Potanina

Measures have also been taken against a group of Russians – including from the Wagner Group militia – and companies linked to Moscow’s support for Bashar al-Assad’s brutal regime in Syria.

In further action, the Foreign Office said the UK was working with other countries to to introduce new measures that will prevent Russia from accessing UK trusts service, which allow a person or business to manage the assets of another.

A Government spokesperson said: ‘As long as Putin continues his abhorrent assault on Ukraine, we will use sanctions to weaken the Russian war machine.

‘Today’s sanctions show that nothing and no one is off the table, including Putin’s inner circle.’

More than 1,000 people and 120 businesses have now been sanctioned by the UK since Russia began its barbaric assault on Ukraine.

The Foreign Office highlighted how Russian imports have dropped more than 40 per cent since the invasion began, as part of the economic squeeze on Moscow.

Mrs Potanina has been battling for a number of years to get a bigger divorce payout from her ex-husband’s huge fortune.

Last year, UK judges ruled she could bring a claim against Mr Potanin in London’s courts – which have become an international destination for the world’s rich to pursue their divorce disputes.

The Court of Appeal noted how the 60-year-old had received ‘only’ around £60million at the time of their legal split in 2013 after more than 30 years of marriage.

Mr Potanin is reported to have admitted to an affair with a junior employee.

This week, Bloomberg reported the oligarch had won permission to appeal a ruling for his ex-wife to renew her claim for billions of pounds.

Mr Potanin was said to now be ready to take the legal battle to the Supreme Court.

Foreign Office sources said they would not comment on specific cases, but highlighted how individuals could apply for licences to allow activities to take place without breaching sanctions.