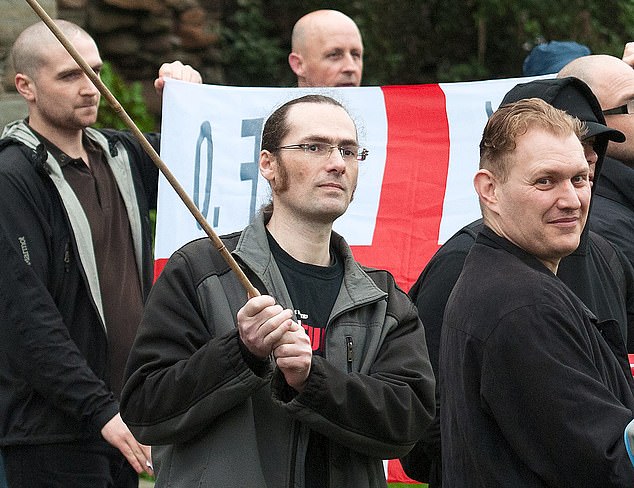 A man accused of setting up a ‘highly racist’ and ‘highly antisemitic’ podcast station called Radio Aryan has gone on trial.

The charges relate to audio files uploaded from May 2019 to March last year on to a website called Radio Aryan – later renamed Radio Albion.

Allchurch used the alias Sven Longshanks, a reference to King Edward I who expelled all Jews from England in 1290.

The episodes are said to have been ‘insulting or abusive’ about ethnic minorities, often uploaded along with inflammatory cartoons and given titles such as Rivers Of Blood, Banned In The UK, the Leftist Supremacist Mindset, and the Usual Suspects.

Prosecutor Ian Wright said that Allchurch was responsible for distributing the audio recordings, was the owner of the website and the main host.

Mr Wright said: ‘Radio Aryan was entirely open to the public, it could be accessed without any checks or logins.

‘The content was highly racist, anti-semitic and white supremacist in nature.’

Allchurch, who is on bail, appeared in the dock wearing a dark green shirt, tie and dark blue suit with his black hair tied into a tight ponytail, with thin rimmed glasses and a walking stick.

He spoke only to confirm his name before the charges were read out to a jury of seven men and five women.

In previous hearings he asked to be referred to by his podcast name, ‘Sven Longshanks’.

The name is said to be a reference to King Edward I, also known as Edward Longshanks, who was responsible for expelling Jews from England in 1290.

Mr Wright told the jury: ‘These recordings are insulting or abusive and were distributed with intent to stir up racial hated.

‘It’s the case for the prosecution that this defendant was responsible for the creation of these audio files, which were highly racist and highly antisemitic in nature.

‘While the name changed from Radio Aryan to Radio Albion, we submit the virulently racist content of the website remained unchanged.’

Mr Wright added that the content was ‘white supremacist in nature’.

He said each of the 15 podcasts will be played to the court during the trial.