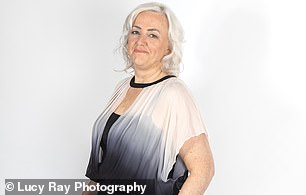 Emma, 41, (pictured) has been single for ten years, and have never married

Single for ten years, never married. My dogs Dolly and Bear are my babies.

I’m incredibly keen to be a mum so I’m looking for someone family-oriented; they need to want children. Humour and confidence are important attributes, too.

On dating sites, I seem to attract the idiots and scammers. I’ve been asked for money three times — although I never gave them any.

When each birthday comes around I do get a bit depressed because it’s another year that’s gone by without finding Mr Right.

My parents put me forward for this; they’re worried about me because they know I want a family.

I’ve been on so many dates that I just get on with it, nowadays. I decided to wear a pair of blush-pink trousers with a black bodysuit and a white jacket.

When I got to the restaurant, I thought I’d spotted my date sitting at a table on his own. I did check first with the waiting staff that it was him, just in case I introduced myself to an unsuspecting stranger!

He kept asking what I thought of him. I said he had nice eyes

I arrived on time, I think Tom had been there for a while before me. Tom has nice eyes and the type of physique I usually go for.

LIKED? Tom is really easy to talk to.

Yes — Tom is the king of one-liners. He made me laugh a lot.

The conversation between us went quite deep for a first date. Tom is a carer for his mum, and he used to be a welder until an eye injury ended his career. As a result he can’t drive, and I did feel for him.

As for me, I talked about my dogs and Tom was lovely about them; he showed me pictures of his cats.

We ordered drinks straight away, a gin and tonic for me and a vodka and cola for Tom, but he took ages to decide what to order. I had seabass and, in the end, Tom decided to have a fish risotto. We had chips, too.

No, but Tom did keep on asking what I thought of him. So I kept on telling him he has nice eyes.

Probably not. There was just something missing for me and not the spark I’d hoped to feel.

I don’t think so. While it was a lovely Sunday afternoon, it isn’t fair to lead someone on.

He told me that he liked me and that I’m a nice person.

My friends would have a laugh with him, but my mum and dad would know he isn’t for me and not my type.

Tom, 40, (pictured) has been single for four years and has never married

Someone shorter than me — I’m 5ft 6in tall. She’ll have nice eyes and a bewitching smile.

The longest relationship I’ve had was 11 months. I’ve been messed around a lot, and I’ve never spent a Christmas as part of a couple. My mum is scared that I won’t have anyone to grow old with — she really wants me to find someone. It doesn’t help that I’ve got five older brothers who are all married with children.

I just wanted to make my date laugh and have a good time. I got to the restaurant 45 minutes early to ensure I was there to greet her.

Emma was two minutes late, which was fine. She gave me a hug and sat down. She’s very pretty.

Yes — the waiter had to return several times because we were so busy chatting. At one point Emma said she needed the loo, and I joked: ‘You’re going to escape, aren’t you?’ When she came back she said she couldn’t find a window to wiggle through, which made me laugh. Emma talked a lot about her dogs and how important they are. I’ve got four cats. They’re the centre of my world, too.

The hen party stared when she disappeared underneath the table

LIKED? I felt so comfortable with Emma.

REGRETS? None at all.

At one point I had to ask her if she could re-tie my shoelace. I suffer with fibromyalgia and my knee was really aching on the day, which made it difficult to bend down. Emma had to go under the table to do it for me. I’ve no idea what the hen party at the next table, who were staring, thought she was doing, but we did laugh about it afterwards.

I like to think so. I asked for her number and we texted, but I’ve not heard from her since. But girls can sometimes make you wait so they don’t seem too keen.

I’d like to. But I suspect Emma can be a bit shy. If we, hopefully, see one another again I think she’ll open up a bit more.

I made her laugh and she did blush a few times. At one point she said I’ve got intense eyes and she couldn’t look at them for long because she could ‘see’ lots of different personalities in them.

My mum would love her. Emma adores animals and that’s a big tick in my family.