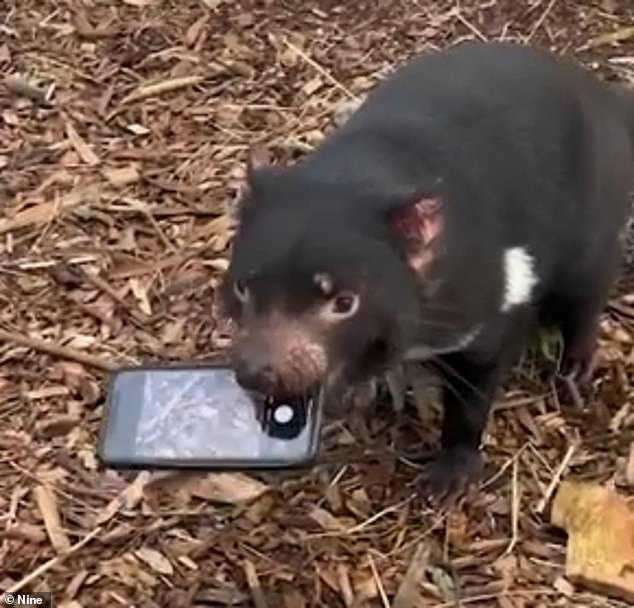 A cheeky Tasmanian devil snatched a woman’s phone and ran away with it after she tried to snap a picture with the creature.

Jacqui Frazer visited Bonorong Wildlife Sanctuary in Tasmania on Thursday afternoon and went to see the marsupial at its enclosure.

She took her iPhone out and leant over the barrier to take a photo of the animal when disaster struck.

The devil jumped up at her, making her drop the phone in shock.

It was quickly snatched up by the devil who took it in its mouth and fled from wildlife keepers.

Hilarious footage shows the keepers chasing after the animal as she hissed at them to stay away.

The devil made it back into its den, clutching the iPhone tightly in its mouth.

After five minutes or so of running around, the keepers were eventually able to get the phone back.

They had to coerce the devil by giving it a shiny stick in exchange for the device.

Eventually, the phone made it back to Ms Frazer – although it had several bite marks in it

The phone has now been returned to Ms Frazer – though it has several bite marks on it.

However, she might have had a lucky escape considering how strong the animal’s bite can be.

Tasmanian devils deliver the strongest bite for its size of any mammal in the world.

Their oversized heads allow them to open their jaws up to 80 degrees wide and their jaws carry enough brute force to crush bone.