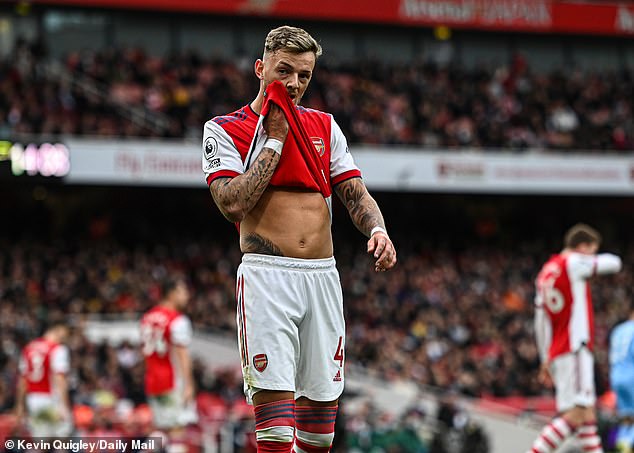 ‘Ben White is very overrated’: Gabby Agbonlahor urges Mikel Arteta to DROP his England international centre-back in favour of William Saliba after he won the Ligue 1 Young Player of the Year while on loan at Marseille

The England international arrived at the Emirates from Brighton in a deal worth £50million last summer and has since forged a partnership with Gabriel at the heart of Mikel Arteta’s defence.

‘Ben White is very overrated’: Gabby Agbonlahor thinks he should be axed for William Saliba

The 21-year-old defender also won the Ligue 1 Young Player of the Year award during his time in the south of France and has since returned to Arsenal in a bid to fight for Arteta’s favour.

Saliba is yet to play a single minute in a Gunners shirt since his £27m arrival from Saint-Etienne in 2019.

Ex-Aston Villa hitman Agbonlahor believes the French defender should usurp White’s spot in the Arsenal back line ahead of yet another top four assault next season.

After just missing out on a Champions League place to rivals Tottenham, the Gunners finished last season with 48 goals conceded, eight more than they let in during the 2020-21 campaign.

‘I’ve watched Saliba a few times and he’s got that speed that you like to see in a centre-half, and he’s very good at making the right decision at the right time,’ the 35-year-old told Football Insider.

‘Arsenal’s defence is nowhere near good enough to get top-four. For me, Ben White is very overrated, I watched him against Newcastle towards the end of the season and he was absolutely dreadful.

‘He lacks pace, he lacks aggression. Yes, he’s good on the ball but he’s not a defensive midfielder, he’s a centre-half.

‘Arsenal need two centre-halves who are no nonsense and have both got speed. For me, Gabriel and Saliba would be my starters next season.

‘With Ben White, I think Brighton are laughing at getting the fee they got for him because he’s not good enough.

‘It’s a shame that Arsenal have wasted a lot of money again. It was the same with Pepe. Ben White was not needed and Saliba should start ahead of him.’