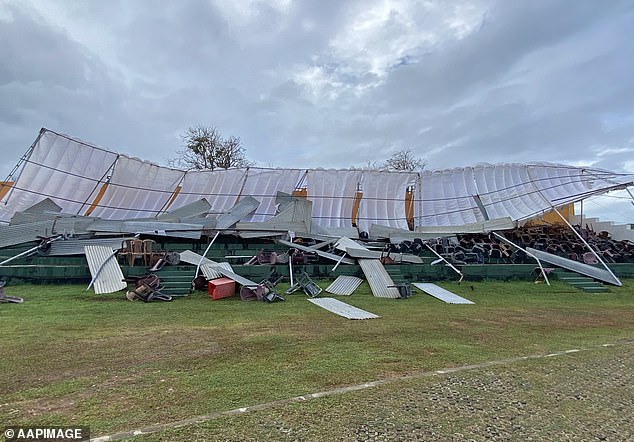 BREAKING NEWS: Grandstand COLLAPSES and its roof gets ripped off as severe weather wreaks havoc with Australia vs Sri Lanka Test

Monsoonal winds and rain have wreaked havoc ahead of day two of Australia’s test match against Sri Lanka in Galle, with a temporary grandstand collapsing, and its roof completely ripped off.

The collapse occurred just as the Australian team entered the ground, with the roof failing to withstand very strong wind gusts that buffeted the beautiful coastal city.

Fortunately no one was in the stand, which is next to the practice nets, at the time, and no injuries reported as of yet.

The three-tired concrete structure was covered by a temporary shade structure that appeared to be very flimsy; especially for a stadium that is located right on the Indian Ocean.

Conditions were decidedly more pleasant on day one – and the temporary grandstand was packed on that occasion.

Play is still delayed until the conditions subside and debris is cleared, with remarkable videos emerging on social media about the lengths local ground staff had gone to, to keep the entire oval dry.

It is incredibly lucky no one was inside at the time, as there is clearly potential for serious injury.

The grand stand for the complimentary ticket holders has just completely collapsed due to the scarily heavy wind this morning in Galle. Stressful times for the organisers as they look to find some temporary seating for them #SLvAus pic.twitter.com/ghQSeOtear

Journalist Bharat Sundaresan, who was at the ground, took Twitter users on a ‘tour’ of the commentary area at the ground, which is perched high in the famous 16th century fort, which towers over the stadium.

It’s safe to say it doesn’t quite have the same lush as the famous Lords press box, though the commentary ‘box’ is reportedly being moved to a safer location according to posts on social media.

One user described the scenes as ‘organised chaos’, while another joked that the weather had been described on forecasting websites as a ‘gentle breeze’.

Nathan Lyon claimed figures of 5-90 to help bowl Sri Lanka out for 212 just after tea on the opening day of the two-Test series, before the tourists went to stumps at 3-98 in Galle.