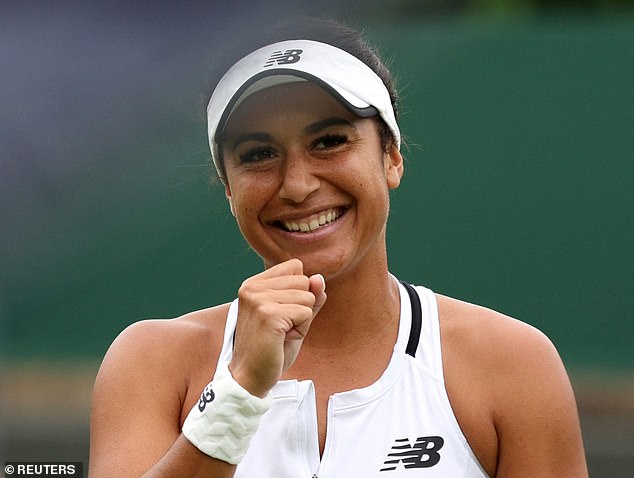 By Matthew Lambert for the Daily Mail

In a match that was bisected by Love Island, four hours’ sleep and a double dose of caffeine gel, Heather Watson won through to the third round at Wimbledon for the first time since 2017.

The 30-year-old Channel Islander was leading China’s Qiang Wang 7-5, 3-0 late on Wednesday night and all was well with the world. But as darkness enveloped Court 18 she failed to serve the match out and play was called off for the night at 7-5, 5-4.

Asked on Thursday whether she turned to her beloved Love Island to decompress, she replied: ‘I actually did to wind down. I slept awful last night because during my match I had to take caffeine to keep up for it when we’re playing at 9 p.m. at night.’

The British No 3 defeated Wang Qiang 7-5 6-4, having done most of the hard work yesterday

After all that Watson came out yesterday afternoon – dosed up on caffeine again – and 14 points and eight minutes later she had broken Wang to take the match 7-5, 6-4.

She has never reached the fourth round at a Grand Slam but she has a puncher’s chance against Slovenian world No 62 Kaja Juvan today.

‘I feel as I’ve gotten older my highs aren’t as high but my lows aren’t as low,’ she said. ‘I’m more level-headed. Making my first third round, I was on top of the world. But I think it’s better being how I am now.’

Watson will play Kaja Juvan in round three, aiming to reach the fourth round for the first time

The beaming Watson could not have cut a greater contrast to the frustrated Harriet Dart as she subsided from a set up to lose 4-6, 6-3, 6-1 to No8 seed Jessica Pegula.

All British players are ‘at home’ at the All England Club but Dart is part of the family. Her mother is a member here and in her support box the LTA tracksuits were outnumbered by AELTC blazers.

This was Dart’s 12th match on grass this year and Pegula’s second, so it did feel like an upset was on the cards, certainly after the home player took a 4-1 lead.

But Pegula – daughter of the billionaire owner of NFL franchise the Buffalo Bills – found her groove. Dart became almost frenetic as she rushed through her service games and took swipes at balls, her bag and the turf in irritation.

‘I was missing so many balls, playing pretty average,’ she said afterwards. ‘Naturally I was getting frustrated.’

‘At the end of the day it’s about finding solutions. Today I didn’t find any.’