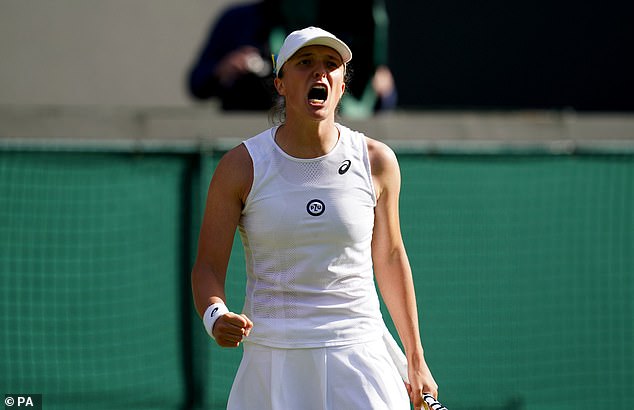 Iga Swiatek advances to the third round of Wimbledon after beating Lesley Pattinama Kerkhove 6-4, 4-6, 6-3… as the World No 1 earns a 37th straight win and equals historic WTA Tour record

She had already surpassed Serena and Venus Williams, now she has matched Martina Hingis. For Iga Swiatek, the next challenge is to join those legends as a Wimbledon winner.

This hard-fought 6-4, 4-6, 6-3 victory over Lesley Pattinama Kerkhove brought her extraordinary winning streak to 37, a run stretching back to February, which has seen her claim six titles.

That year, the Swiss lifted her only singles trophy at SW19. But if history is to repeat itself a quarter of a century on, Swiatek is going to have to up her grass-court game.

Despite being a junior Wimbledon champion in 2018, the world No1 has never gone past the fourth round in the main draw here.

It was perhaps a surprise, then, that after winning her second French Open title at the start of last month, Swiatek chose to rest rather than practice on her least familiar surface.

Although she won Monday’s opening tie against Jana Fett in straight sets, Swiatek was not entirely convincing.

And dropping a set against lowly Pattinama Kerkhove in this second-round clash suggests the Wimbledon crown is far from the formality the bookies would have you believe.

Pattinama Kerkhove is the world No138 and only entered the draw as a lucky loser. But the Dutchwoman broke her illustrious opponent twice in her first three service games on Court 1.

From 2-4 down, though, Swiatek suddenly woke up and began to dominate from the back of the court.

Despite her career success, Piatek has never passed the fourth round at Wimbledon

She reeled off four straight games to take the opener and normal service appeared to have resumed.

But Pattinama Kerkhove was not to be outdone. She broke to lead 4-3 in the second set with a lucky net cord and then, after surviving a break point when Swiatek incorrectly challenged a call mid-point, she served out to level up the match.

Swiatek took herself off the court for what felt like an age. It appeared to do the trick as, when she returned, she looked much more like the player we have seen in recent months.

She broke Pattinama Kerkhove in the fourth game of the decider with a crushing forehand winner and never looked back, seeing the set out 6-3 to reach round three.

Lesley Pattinama Kerkhove acknowledges the crowd after her second round defeat