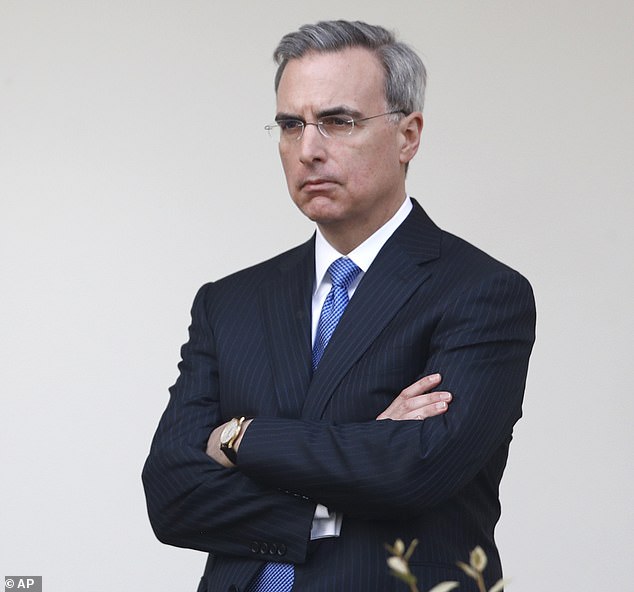 Former White House Counsel Pat Cipollone is facing a subpoena for ‘on the record’ testimony before the January 6 select committee, the panel announced on Wednesday evening.

‘The Select Committee’s investigation has revealed evidence that Mr. Cipollone repeatedly raised legal and other concerns about President Trump’s activities on January 6th and in the days that preceded,’ the panel’s Chairman Bennie Thompson, a Democrat, and Vice Chair Liz Cheney, a Republican, said in a joint statement on the subpoena.

‘While the Select Committee appreciates Mr. Cipollone’s earlier informal engagement with our investigation, the committee needs to hear from him on the record, as other former White House counsels have done in other congressional investigations,’ they added in the Wednesday statement.

‘Any concerns Mr. Cipollone has about the institutional prerogatives of the office he previously held are clearly outweighed by the need for his testimony.’

Cipollone was the White House counsel for former President Donald Trump from December 2018 to the end of his time in office in January 2021.

The lawyer was present at the January meeting last year in the White House where he reportedly argued against the proposal by Trump to replace acting Attorney General Jeffrey Rosen with Jeffrey Clark, who was more friendly to the then-president’s election fraud claims.

Although Cipollone has cooperated in an informal capacity with the select committee, he is now being called to go on the record with the panel.

One person familiar with Cipollone’s deliberations told a New York Times reporter on Wednesday that ‘of course a subpoena was necessary before the former White House counsel could even consider transcribed testimony before the committee.’

‘Pat Cipollone has previously provided an informal interview at the committee’s request,’ the source added. ‘Now that a subpoena has been issued, it’ll be evaluated as to matters of privilege that might be appropriate.’

In a letter to Cipollone, the panel says that it is seeking more information on what the former White House counsel knows about ‘Trump’s awareness and involvement in activities undertaken to subvert the outcome of the 2020 presidential election.’

They also claim that after Cipollone talked with the panel behind closed doors in an off-the-record session he ‘declined to cooperate with us further.’

In the letter demanding Cipollone’s public testimony, the panel said that he ‘declined to cooperate’ with the panel after going behind closed doors for an informal interview