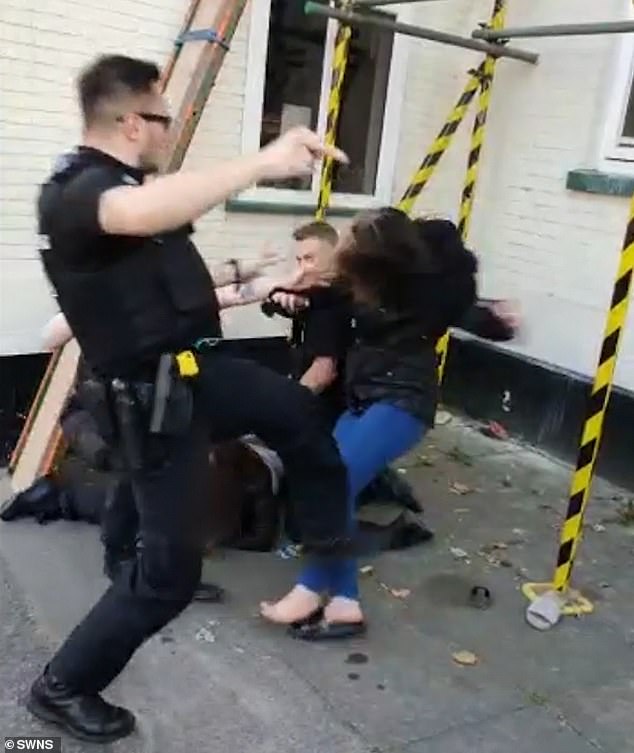 By Oliver Price For Mailonline

A police officer has escaped being sacked, receiving just a written warning after he was filmed knocking 15-year-old girl to the ground with ‘big flying kick’.

The male Norfolk Police officer, who has not been named, was caught on camera kicking the teen in her waist in Norwich on September 26.

Norfolk Police have confirmed the officer has received a final written warning for misconduct.

The force initially referred the incident to the Independent Office of Police Conduct, but it was passed back for an internal review by Norfolk Police.

The male Norfolk Police officer (left), who has not been named, was caught on camera kicking the teen (right) in the waist with a ‘big flying kick’ in Norwich on September 26

Footage of the incident, which happened outside the City of Spice Indian restaurant, begins with a different male officer attempting to arrest a woman.

The video showed a her screaming and shouting, ‘I’ll land on top of you, yeah,’ to police before rolling him to the ground.

A second can arrived and a female officer assisted her colleague in detaining the girl on the ground, the Metro reports.

The incident began with a woman was struggling with police officers outside an Indian restaurant. She then shouted, ‘I’ll land on top of you, yeah,’ before rolling the officer to the ground

One minute later the male officer in question is seen running onto the scene and delivered a ‘big flying kick’ to another girl, believed to be 15-years-old.

He shouted ‘move back’ as he delivered the powerful kick sent her flying into scaffolding before falling to the ground.The girl can be heard screaming and says ‘don’t put your knee on my belly’ as the officer handcuffs her.

Dexter Hanna, 41, who filmed the incident, claimed last September that the officer ‘didn’t ask any questions’ before kicking the teen.

In the video he can be heard telling the officers: ‘You might break her neck if you keep doing that’.

But he added that the girls were ‘trying to impress me’ as he caught the incident on video.

One minute later the male officer in question is seen running onto the scene and delivered a ‘big flying kick’ to the other girl at the scene, believed to be 15-years-old

The officer then stood for a second and watched his colleagues. He was then filmed dealing with the girl he had just kicked in the stomach

The unnamed officer has been given a final written warning for misconduct, Norfolk Police have confirmed

‘Then she was putting on more of a show when I started recording.

‘They were bulling him [the officer] and almost beating him up.

‘When the other one came he didn’t ask any questions he just gave a big flying kick.’

A Norfolk Police spokesperson said: ‘Following an investigation, conducted by our Professional Standards Department, the officer in question received a final written warning for misconduct.’