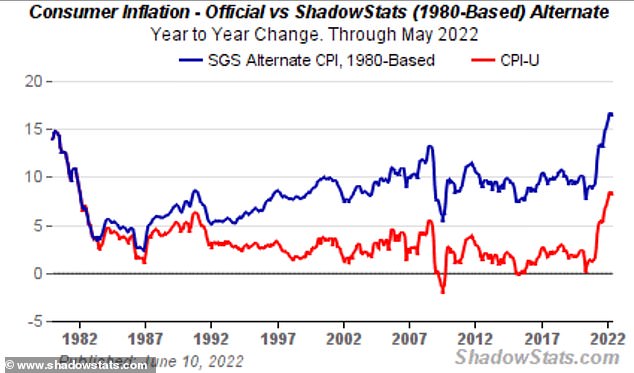 Andy Puzder is a former CEO of CKE Restaurants, chairman of 2ndVote Value Investments, Inc., and a senior fellow at the America First Policy Institute.

Jim Talent is a former U.S. senator from Missouri and the Chairman of the Reagan Institute’s National Leadership Council

The outlook for the U.S. economy is bad and potentially getting worse.

On Thursday, the Commerce Department released new consumer spending numbers showing that the prices Americans are paying for goods and services climbed 6.3% over the past year, as inflation maintained its upward momentum.

Just 24 hours earlier, Federal Reserve Chairman Jerome Powell warned, yet again, that his efforts to rein in runaway price increases by raising interest rates may plunge the nation into recession.

And he said it’s worth the risk.

‘The bigger mistake to make—let’s put it that way—would be to fail to restore price stability,’ he said at the European Central Bank’s annual economic policy conference in Portugal.

Prior to that revised GDP numbers showed the US economy contracted even more than initially reported in the first quarter of the fiscal year, as more consumers opted to save instead of spending their hard-earned dollars.

Now, what if we told you that America’s economic outlook is even darker than that?

What if we told you that the dire statistics splashed across the headlines and your TV screens don’t even come close to accurately describing the reality?

Well, buckle up – because that’s what we’re telling you.

Economist John Williams estimates the inflation number today would be about 16% if it were calculated as it was in the Carter years. (Key above) The SGS-Alternate CPI, 1980-Based (blue line) relies on the methodology which was employed prior to 1983. The CPI-U (red line) is the measure of consumer price inflation for goods and services published by the Bureau of Labor Statistics

One way to understand today’s inflation is to compare it to the last major inflationary spiral that occurred during the Jimmy Carter Administration in the late 1970s and early 1980s.

The headline inflation rate – the measure of total consumer inflation in the economy – peaked in March of 1980 at 14.8%.

On the surface, that comparison is reassuring.

But is the comparison valid?

There’s a lot of evidence to suggest that it isn’t.

In 1983, the government changed the way it calculated inflation in ways that tend to understate inflation today as compared to 40 years ago.

The Summers’ Report specifically analyzed the impact of a formula change by the Bureau of Labor Statistics (BLS), whereas it discounted the impact of homeownership costs on overall inflation measurements.

Adjusting for that change alone, the Summers Report found that the headline inflation rate of 14.8% in March of 1980 would drop to 11.6%, only barely 3 percentage points higher than the current rate of 8.6%.

The Fed’s preferred inflation rate known as core inflation (a measure that excludes energy and food prices), would experience an even more significant adjustment.

For comparison, in March 2022 the post-pandemic core inflation rate peaked at 6.5%.

This suggests that if we were to evaluate today’s inflation numbers in the same way that we calculated inflation in the 1980s – we’d already be squarely in Jimmy Carter territory.

In the words of the Summers Report, ‘[t]he current situation is of similar magnitude of past [inflationary] episodes.’

Another analyst reached the same conclusion by adjusting the numbers in the opposite direction; he attempted to calculate today’s inflation using the methodology from 40 years ago.

John Williams, a publisher of an economic newsletter service that analyzes government economic data, has argued for years that government formula changes after the Carter stagflation years had the effect of substantially reducing inflation calculations compared to prior years.

The government’s motive, according to Williams, was to reduce the size of mandatory cost of living adjustments in federal entitlement programs.

His basic argument is that the government stopped measuring inflation by looking at the relative costs of a fixed basket of goods at different times, and instead substituted measures of consumer satisfaction, which allowed the BLS to underreport the increases in the price of goods that consumers were actually buying.

Williams estimates the inflation number today would be about 16% if it were calculated as it was in the Carter years.

With respect to goods that consumers are actually buying, the American Institute of Economic Research provides an estimate of consumer costs for a basket of ‘everyday’ items—eliminating from consideration infrequently purchased items or contractually fixed items (i.e., vehicles, furniture, and leases).

So, why is it important whether the current inflation is as bad as it was 40 years ago, or only half as bad?

For one thing, the Federal Reserve is currently raising interest rates each month with a view towards getting them high enough to at least equal and, more likely exceed, the rate of inflation.

If inflation today is really as high now as it was 40 years ago, then that means that the Fed is twice as far away from the needed interest rate target as we now think.

Paul Volcker (right with President Ronald Reagan), the chair of the Federal Reserve from 1979 to 1987, who is credited with controlling runaway inflation in the 1980s, had to raise interest rates to 20% to tame inflation.

And that means that raising rates .75% each month (as the Fed did in June) isn’t going to cut it.

The Summers’ Report notes that a ‘return to 2 percent core CPI inflation today will thus require nearly the same amount of disinflation as achieved under Chairman Volcker.’

Paul Volcker, the chair of the Federal Reserve from 1979 to 1987, who is credited with controlling runaway inflation in the 1980s, had to raise interest rates to 20% to tame inflation.

As chairman Powell warned – the risk of a recession is real and to many it seems almost inevitable now.

But the extent of the recession, and the suffering it will cause, could be mitigated if the government will face up to the size of the challenge and the urgent need for immediate and decisive action.

Reasonable people can argue about what exactly should be done, but one thing is certain: we’re in real trouble, and we’re not going to get out by pretending the problem is smaller than it is.