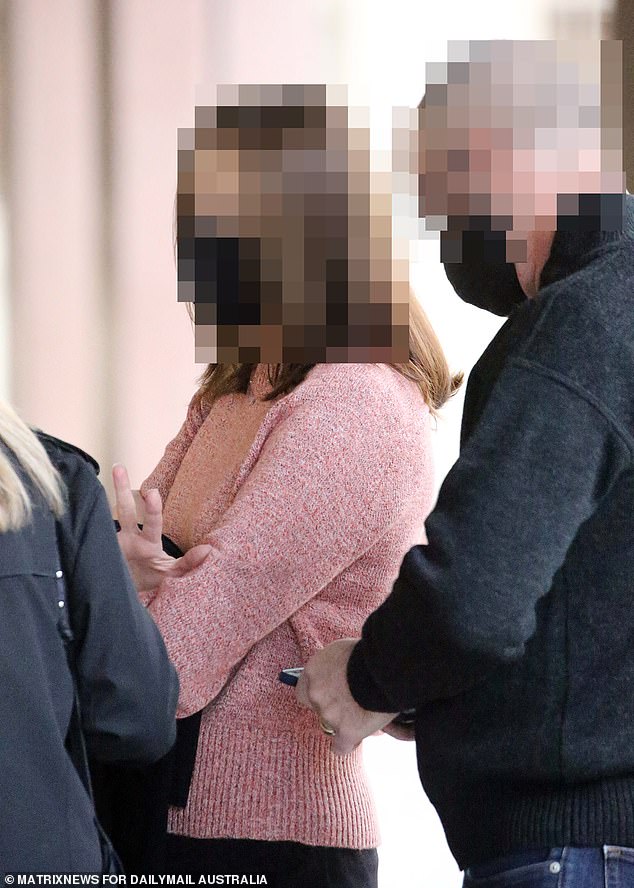 William Tyrrell’s foster mother has been refused an application to have charges she allegedly hit, kicked and intimidated a ten-year-old girl to be heard on mental health grounds.

The court heard that the foster mother at one point called a friend and allegedly said ‘I need to break her’, with police having a strong case for the charges because of audio surveillance in the home at the time.

Looking noticeably thinner and with her hair a darker shade, the foster mother appeared at Parramatta Local Court on Thursday on four charges – two of assaulting and two of intimidating a ten-year-girl in a family home.

The court heard that after July last year the woman known as SD allegedly hit the girl with a wooden spoon and then ‘kicked her on the floor’ in what Magistrate Peter Feather described as the ‘more serious’ charge.

Prosecutors told the court the intimidation was ‘part of an ongoing pattern of violence’ in the home and that the ten-year-old had become ‘jealous’ and started ‘to act up’ when a six-year-old child entered the home.

Magistrate Peter Feather said SD had hit the girl with a wooden spoon on her body and assaulted the girl by kicking her in the left thigh.

Both SD and JS were charged with common assault and stalking of the girl last year with JS pleading not guilty.

SD’s failed mental health application means she will attend the same hearing with her husband, listed for January 16 next year.

William Tyrrell’s foster mother and father(above) arrive at court where the noticeably thinner mother was applying to have charges she allegedly hit, kicked and intimidate a 10-year-old girl heard on mental health grounds

Mr Feather told the court it was a case where ‘the child is misbehaving, the ten-year-old’ and that a six-year-old had changed ‘the dynamics in the family’ causing ‘a degree of jealousy in the child’.

He said this had caused ‘problems in terms of parenting’.

Prosecutors told the court that the child had been ‘misbehaving… (over) a very long period of time’.

But Mr Feather said the fact the alleged offences had occurred in front of another child and three other aggravating factors made them more serious.

SD’s lawyer Sharon Ramsden told the magistrate that the foster mother’s alleged offending had happened in ‘a unique set of circumstances’.

A forensic psychology report tendered to the court said the foster mother had been diagnosed with major depressive disorder and post traumatic stress disorder (PTSD).

Magistrate Feather said he was satisfied this was true and that at the time of the alleged offending SD had been ‘highly stressed’.

But he believed the charged had to be heard under the criminal justice system rather than the Mental Health Act and that if he were sentencing SD today he would give her a two-year community corrections order.

Officers from Strike Force Rosann, the team set up by NSW Police to investigate William Tyrrell’s disappearance, including Detective Sean Ogilvy and Detective Sergeant Andrew Lonergan were in court for the hearing.

Police allege the 55-year-old caused the girl ‘pain and bruising’, and also hit the girl with a wooden spoon.

William’s foster father is due to face a trial next year after police allege he ‘grabbed’ the girl around the neck and ‘physically restrained her to sit back down’.

The foster couple also allegedly subjected the girl to a 15-minute ‘tirade of verbal abuse’ while she pleaded them to stop and later told a teacher she was afraid to go back to the house.

The child had been placed in a 44-minute time-out ­period in November last year and had then told the couple, known by the pseudonyms SD and JS, that she ‘hated them’.

SD and JS had been ‘attempting to intervene in the (alleged) victim’s problematic behaviour’ and William’s female foster carer had told the girl that if she were to defecate on the floor she would rub her face in it, it is alleged.

The details of the allegations against the couple in a psychologist’s report were revealed earlier this month after a successful appeal to have a suppression order set aside, The Australian reported.

Police will allege that when the child screamed out in pain, SD ‘then forced the child to sit on the floor for an extended ­period of time before kicking the (alleged) victim and causing her pain and bruising. The (alleged) victim is reported to have tried to get up a number of times but (SD) forced her to sit down.’

The report states police will ­allege the child was ‘pleading’ with SD to stop while the two ­defendants allegedly subjected her to a 15-minute ‘tirade of verbal abuse’.

The alleged victim spoke to her schoolteacher and ‘expressed being afraid to return home’.

Last year, as police embarked on a new search of bushland near the NSW Mid North Coast town of Kendall for the remains of William Tyrrell, SD and her husband JS were charged with common assault of the girl.

Earlier this year they were charged respectively with two counts and one count of  stalking and intimidation intending fear of physical harm against a child.  The foster mother’s Mental Health Act application comes as William’s foster father has put more children’s items up for sale online.

Daily Mail Australia exclusively revealed in April – just days after being charged with stalking – that the foster parents were holding a massive fire sale of children’s bikes, car seats, prams, furniture and a water tank with items as low as $5.

Police allege the foster mother (left with William) subjected the girl to a 15-minute ‘tirade of verbal abuse’ while she pleaded with her to stop. William (right) wearing his favourite red fireman’s hat on a slide after his removal into foster care

The latest items listed by the foster father for sale include a white double bunk bed with blue and pink flowered sheets, a child’s multi-coloured guitar, and child-sized wetsuit.

He is also selling children’s books including Roald Dahl’s Fantastic Mr Fox and a set of Dr Seuss books.

JS has pleaded not guilty to the assault and stalking charges and has been listed for hearing on January 16 next year.

William disappeared aged three in September 2014 in the NSW Mid North Coast town of Kendall and no trace of the toddler has ever been found.

A new search of bushland within 700m of the Kendall house where William was last seen was conducted late last year, but no items of significance have been identified.

Police search the Benaroon Drive house where William Tyrrell was last seen on the morning of September 12, 2014 during a ‘high intensity’ probe for the missing toddler’s remains