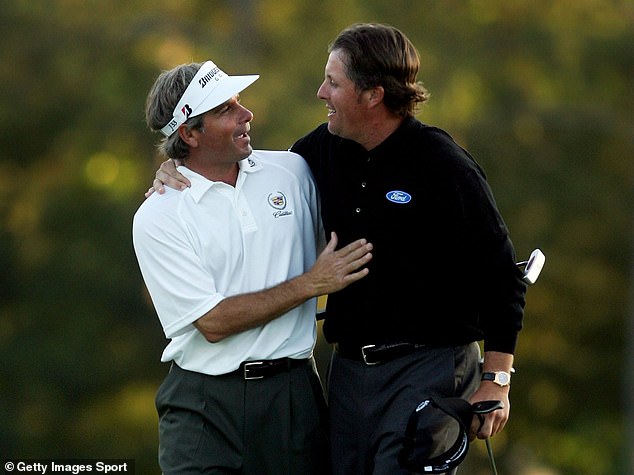 ‘I don’t think I’ll talk to him ever again’: Former Masters champion Fred Couples says he will cut ties with ex-Ryder Cup team-mate Phil Mickelson after he joined the LIV Golf tour – and claims defectors know the series is a ‘joke’

Former Masters champion Couples, who is captaining the US squad at the Icons Series in New Jersey this week, said he is ‘disappointed’ that players have jumped ship because the Saudi Arabia government is financially backing it and they have effectively been muzzled.

‘I don’t think I’ll ever talk to him again,’ Couples told Golf.com.

‘What for? I’m not in the same boat as him anymore, and probably never will play golf with him again.

‘I’m not saying that to be mean. We’re just in different orbits.’

He continued: ‘These guys – you’ve seen their interviews, right?

‘Have you ever seen Phil look so stupid in his life? They know it’s a joke. They’re all saying they want to change golf; they’re doing it for the better of golf.’

Couples said his family ‘would disown me’ if he defected from the PGA Tour.

‘I think this is a family thing for me,’ he said. ‘I’m a little peon from Seattle, but I know where the money’s coming from, and I think my family would disown me if I went. Of course, that’s easy for me to say because I’m not going, so I can actually tell you whatever I want to tell you.’

Mickelson is among the high-profile players to have ditched the PGA Tour to join the LIV series, with the others including Dustin Johnson, Lee Westwood and Brooks Koepka. All of those to have defected have been banned by the PGA Tour.