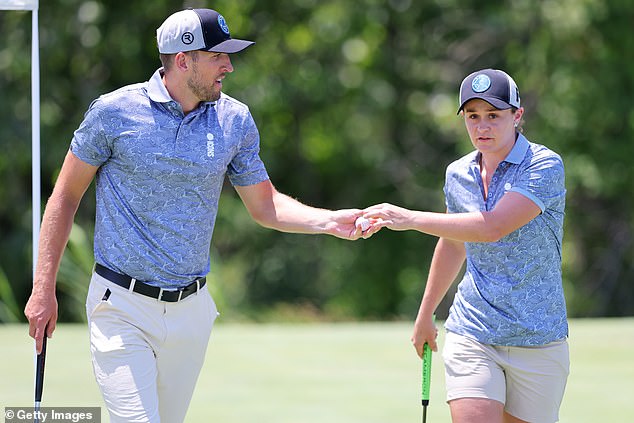 Harry Kane is not just a sharpshooter in the penalty box, with the Spurs star sinking a huge 18-foot putt on an otherwise drab first day for the footballer and Ash Barty in the Icons Series.

Barty shocked the sporting world after announcing her retirement earlier this year aged just 25, citing her desire to chase ‘new dreams’ as a driving factor for walking away from the sport while at the peak of her powers.

The 25-year-old entered the Icons Series – which pits a team of sporting stars from the US against a rest of the world group – with much fanfare, having won a tournament in Brisbane in April.

However, the Aussie had an altogether miserable first day in the Big Apple, losing in the fourballs to their American rivals alongside Kane, before later falling to defeat with cricket icon Ricky Ponting against Reggie Bush and Michael Vick in another round of fourballs.

Barty and Kane picked up a point in the greensomes after seeing off Ben Roethlisberger and Marshall Faulk, although the England captain could not extend his winning run in his second round of fourballs with boxing superstar Canelo Alvarez. The duo lost to Faulk and Michael Strahan.

Team USA boast a five-point lead over Team Rest of the World with a scoreline of 10-5 heading into the second and final day of the competition.

Liverpool veteran James Milner was the standout performer for the Rest of the World, winning both of his fourball rounds with Ponting and former Manchester United and Leeds star Alan Smith.

As for Barty, she will be hoping to respond tomorrow and help her team mount an unlikely comeback in New York. Twelve singles matches are sandwiched by two rounds of fourballs to complete the event.