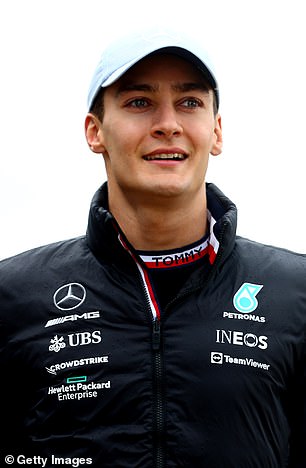 ‘I just don’t see as fun a side to him’: Lando Norris claims George Russell’s move to Mercedes has taken away some of his personality due to pressure of taking on Lewis Hamilton as a team-mate

Lando Norris believes George Russell’s move to Mercedes has restricted him from being able to display his full personality.

Russell joined the constructors’ champions from Williams at the start of 2022 to replace Valtteri Bottas as Lewis Hamilton’s team-mate.

So far the Brit has enjoyed a relatively good start in the Mercedes hot seat, securing top-five finishes in the first nine races of the season in a car that is well off the pace of the Red Bulls and Ferraris, while also establishing a 34-point advantage over the seven-time world champion in the process as he sits fourth in the overall standings.

Norris though believes Russell’s move has also forced him to cut a figure that restricts how much personality he can show, insisting the 24-year-old now carries a different vibe that has taken away his fun side.

‘My manager, my trainer, my parents, have always tried to keep me as me, rather than try to shape me,’ Norris said.

‘I see other drivers get shaped more because of who they are with, the teams they are with, and I don’t think that is a good thing. It takes away their personality.

‘Growing up with George for instance, was a lot of fun. He was a great person, but it is different at Mercedes – a different vibe and a different atmosphere. I just don’t see as fun a side of him.

‘George is a great person, and I feel like the personality he had a few years ago, he would be even more popular.

Norris though was keen to stress that he wasn’t complaining about Russell’s new approach, admitting his serious demeanour is working for him in an environment where he has to be at his most focused to take on the challenge as working with the ultra-quick Hamilton as a team-mate.

‘I don’t think it is Mercedes’ fault but the pressure of being with Mercedes, and having Lewis [Hamilton] as a team-mate, is never going to be an easy thing,’ he added.

‘You don’t want to be seen to be having a fun time and playing around, but on the other side there are no complaints because George is doing an amazing job this year, so it is working for him.’

Norris, Russell and Hamilton will all be looking to impress this weekend as they prepare for their home British Grand Prix at Silverstone.

While Norris’s McLaren looks unlikely to be quick enough to compete for a podium, Russell and Hamilton will have hopes of battling each other to secure a top three finish in front of their home fans.

Norris’s claims came before he was involved in a separate battle before Sunday’s main event… a space-hopper race with team-mate Daniel Ricciardo.

With defeat looking certain, Norris tried to cheat by running over the line, only for Ricciardo to then jokingly hit him in the face with the inflatable – prompting laughter from both.