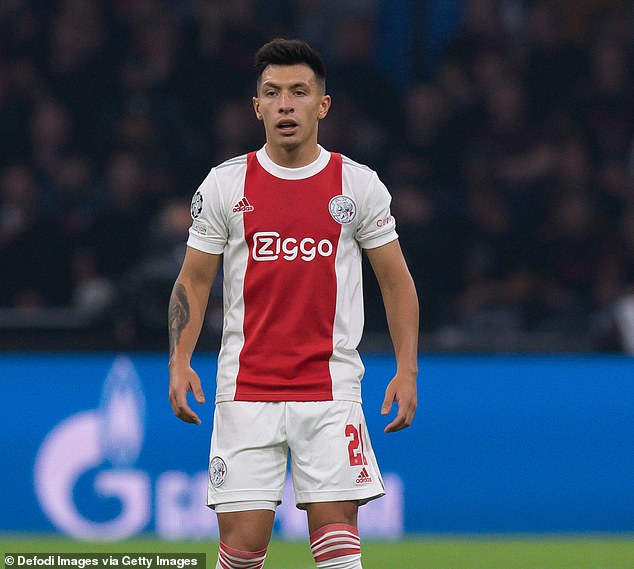 Manchester United make a £34.5m bid for Ajax defender Lisandro Martinez after rivals Arsenal lodged a similar rejected offer of their own… with the Dutch side holding out for £43m for their centre back this summer

Manchester United have made an offer of £34.5million for Ajax defender Lisandro Martinez.

Arsenal have already seen one offer of similar value rejected, but United could inflate their proposal with add-ons.

It is thought Ajax are holding out for a package in the region of £43m for the 24-year-old Argentina international.

Manchester United have made an offer of £34.5million for Ajax defender Lisandro Martinez

United’s £13m swoop for Feyenoord’s Tyrell Malacia has been complicated after an attempt by the defender to dump his agent.

Malacia remains on course to become new manager Erik ten Hag’s first signing but the switch has been delayed because of his unusual decision to change representation midway through the transfer.

United remain confident the issues will be resolved and that the deal can be completed in the coming days.

Malacia has been looked after by HCM Sports Management.

United are confident that the issues are well on the way to being fully resolved and that the deal can be rubber-stamped in the coming days.

Importantly, the problems have not impacted on the agreement between United and Feyenoord.

However, there was some concern that the external problems could cause issues with regards to United’s move for De Jong, though the Premier League club are hopeful that the complications that have added complexities to the Malacia deal will not impact their move for the Barcelona midfielder.

Sportsmail revealed earlier this week that United were close to agreeing a deal with Barcelona for the Holland midfielder, in a deal that could be worth up to £70million, with the talks between both clubs ongoing.

Malacia looks set to strengthen United at left back, with Luke Shaw and Alex Telles the club’s other main options in that position.

Feyenoord director Frank Arnesen had even previously revealed that they had agreed a deal with United for Malacia.

Arnesen told 1908.nl: ‘The agreement with Man United is there. We are now waiting for Tyrell. If Malacia says yes, then a transfer to Manchester United is imminent.’

Malacia has five senior caps for Holland having previously represented his country at various youth levels.

A product of Feyenoord’s academy, he has made 136 senior appearances for the club and won the KNVB Cup in the 2017-18 campaign.