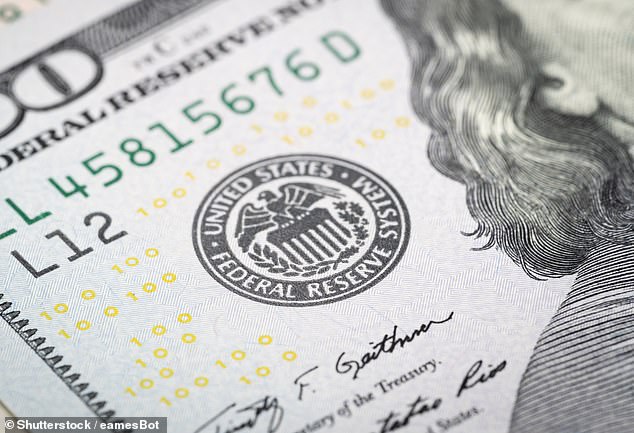 By John-paul Ford Rojas For The Daily Mail

The US Federal Reserve looks set to intensify its painful prescription of interest rate rises after inflation in the world’s biggest economy soared to its highest level for more than 40 years.

In a report that sent shock waves through financial markets, the US government said that inflation climbed to 9.1 per cent in June, a level which has not been seen since November 1981.

Investors were last night pricing in a 60 per cent probability of the Fed hiking rates by a whole percentage point at its next meeting in two weeks’ time.

Hike: Investors were pricing in a 60 per cent probability of the Fed hiking rates by a whole percentage point at its next meeting in two weeks’ time

That would be the biggest rate rise since December 1980 and would follow an increase of 0.75 percentage points last month.

Speculation that the Fed would take such an aggressive step mounted after the Bank of Canada, which is also facing an inflation battle, yesterday announced a full percentage point hike.

Chris Zaccarelli, chief investment officer at Independent Advisor Alliance, said inflation in the US was now ‘staggeringly high’. ‘It’s higher than expected and shows that inflation is going quickly in the wrong direction,’ he said.

America’s increasingly aggressive response to inflation has already seen the dollar steamroller rival currencies in recent weeks – and analysts warned that it could get even tougher.

The euro yesterday briefly dipped below the level of the dollar for the first time in two decades, hitting $0.99 shortly after the data was published.

The turmoil also spread to the oil market, where Brent crude dipped to $99.61 a barrel.

The market moves were pared back later in the session, with some experts suggesting that inflation was now hitting its peak and playing down talk of a percentage-point increase. US president Joe Biden said that the inflation figures were ‘unacceptably high’ but insisted the data did not reflect more recent falls in fuel prices. The Fed has been increasing interest rates to try to cure the scourge of inflation by cooling demand.

Soaring commodity costs and supply-chain bottlenecks that have driven the initial spike in prices could prove temporary but a red-hot labour market – with nearly two vacancies available for every one unemployed person – is pushing up wages, threatening to prolong the crisis.

However the Fed’s medicine to cure the problem is to squeeze consumer and business borrowers. This could have the unpleasant side effect of tipping the economy into recession.

The effects of US interest rate hikes are also felt around the globe, squeezing borrowers with dollar-denominated debts as well as importers of dollar-price goods, including oil.

The latest move was the biggest increase since 1994.

Markets expect that the latest inflation print will cement another hike of at least the same scale again.

The Fed has not increased rates by one percentage point or higher since December 1980, under the leadership of Paul Volcker, who was a central bank chairman noted for his ultra-hawkish approach to cooling America’s price spiral.

In stark contrast to the Fed, the European Central Bank, which is being wracked by record inflation of 8.6 per cent, still has an interest rate of minus-0.5 per cent, though this is widely expected to move later this month.