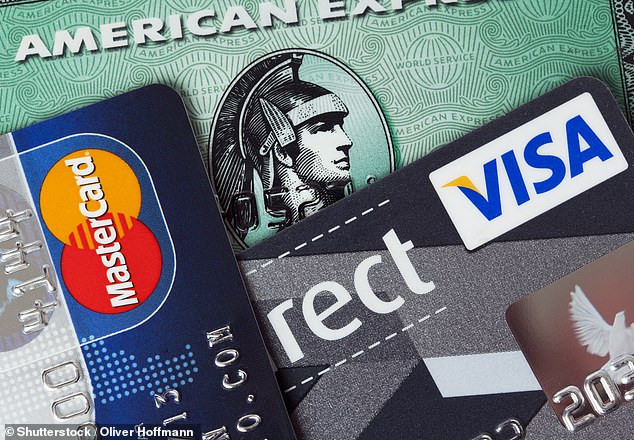 Britons turning to credit cards and loans to cope with the cost of living crisis are being hit by higher interest rates, the latest Bank of England figures show.

The latest Bank of England household interest rate figures showed that the cost of borrowing on credit cards and loans continued to rise in June.

According to analysis by Freedom Finance, this is approaching levels not seen since 1998 – the last time that average rates surpassed 21.5 per cent.

Cost of borrowing: Average credit card rates jumped to 21.43% in June and are now approaching levels not seen since 1998 – the last time average rates surpassed 21.5%

Personal loan borrowing is typically cheaper, but rates for these products are also starting to rise.

Typical £10,000 personal loan rates are now the highest they have been in nearly six years, according to Freedom Finance, since rates hit 4.14 per cent in August 2016.

This comes at a time when demand for lending on credit cards and loans is rising, according to the Bank of England’s latest survey.

It found that lenders are reporting that overall demand for unsecured lending increased between April and June this year.

Demand for cards is expected to rise again through the summer, as rising prices take their toll.

Sarah Coles, senior personal finance analyst at wealth manager Hargreaves Lansdown said: ‘Demand for debt flourished this spring, as price rises ran rampant and the banks expect us to keep reaching for our credit cards to plug the growing gaps in our finances during the summer too.

‘The problem with borrowing for everyday costs is that you’re adding more interest and repayments to your ongoing costs, so that every month, the impossible challenge of making ends meet becomes harder.

Seek support: The FCA is urging borrowers in financial difficulty to look for help or contact their lender as soon as possible

The rise in borrowing costs doesn’t just stop at personal loans and credit card rates either.

Average overdraft rates have been consistently rising to new highs since recent regulations were introduced in April 2020 by the FCA.

This included, banks no longer being able to make increased charges when customers went over their arranged overdraft limit with no increased interest allowed for ‘unauthorised’ overdrafts.

All fixed daily and monthly fees on arranged overdrafts were replaced with a single overdraft interest rate.

Over the past year, the average for that single overdraft rate has risen from 31.75 per cent to 35.24 per cent – a record high.

Rising rates: Those looking for a personal loan of £10,000 will have seen average rates rise  over the past year

‘Overdraft rates are at record highs, credit cards are nearing their highest rates since before the Millennium and personal loans are also becoming more expensive.

‘It all adds up to a painful situation for household incomes and budgets.’

The data comes after a warning from the FCA last week urging borrowers in financial difficulty to seek help or contact their lender as soon as possible if they are struggling to make payments.

Hendry believes this is all the more important given the expected increases in base rate that could drive the cost of borrowing even higher.

‘Getting into financial difficulty is not something to be embarrassed about, and the sooner people take action the better,’ he adds.

How can you keep on top of your debts?

For anyone with multiple forms of credit to repay, it’s always sensible to prioritise paying off the most expensive debt and to try and move credit commitments onto cheaper rates or products.

Carrying out an audit of existing debt to see what rates are currently available and whether there are cheaper deals on the market is a good place to start.

This is Money looks at some of the best cards on the market here.

It is possible to compare the best credit card and personal loan deals on the market using a comparison site.

It’s also worth checking whether there are any hidden fees or charges and understand what the total payments will be instead of just taking the lowest monthly payment.

Checking any eligibility for benefits like Universal Credit, Jobseekers Allowance and Housing Benefit may also help some people to reduce their need for consumer credit.

Hendy adds: ‘There may be immediate steps they can take to relieve financial pressures, such as checking eligibility for benefits they may be missing out on or consolidating multiple debts into a single payment to make repayments simpler.

‘Lenders may also be able to help with actions like payment holidays.’

Demand up: The Bank of England found that lenders are reporting that overall demand for unsecured lending increased between April and June this year

Consolidating debt can also be a great way of keeping track of repayments more easily while moving debt to products with a cheaper rate is also a good solution.

For example, one potential avenue of respite for those struggling to cope are balance transfer credit cards.

Balance transfer cards have long provided a way to cut down on costly interest payments by transferring credit card debt over to a new card, often with the promise of 0 per cent interest for a fixed period of time.

Banks reported that the length of interest-free periods on credit cards for balance transfers and purchases increased over the past three months, and they expect this to once again increase slightly over the coming months.

As long as borrowers keep up with payments and stick by conditions they can use these cards to clear debts with no interest, instead of paying typical credit card APRs.

THIS IS MONEY’S FIVE OF THE BEST CURRENT ACCOUNTS