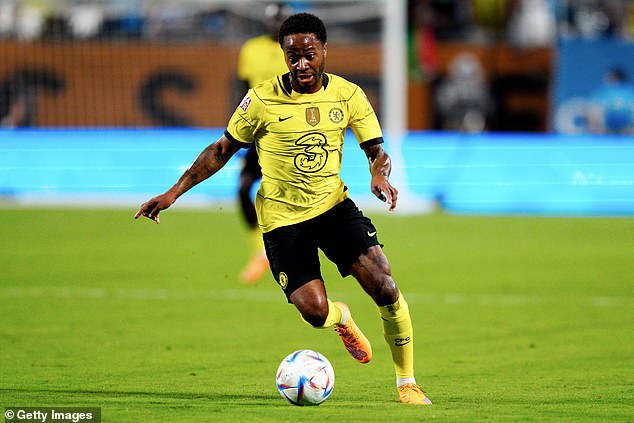 Raheem Sterling made his debut as the men from the King’s Road failed to win in the Queen City – with Chelsea falling to a shootout defeat against a spirited Charlotte FC on the second match of their three-game US tour.

The £47.5m arrival from Manchester City scored his spot-kick but a miss from Conor Gallagher, who passed his penalty down the middle only for a motionless Pablo Sisniega to make the decisive save, saw the MLS side prevail for the biggest win in their short history.

American Christian Pulisic gave the tourists a first-half lead with a home-turf chip but a last minute penalty prompted spot-kicks, with the home side prevailing 5-3 in front of a delirious 52,673 crowd.

Manager Thomas Tuchel was happy with what he saw from Sterling, who came on at half-time, but pulled few punches in assessing what was an underwhelming night in North Carolina.

‘I didn’t see it today,’ he said when asked if the post-interval front three of Sterling, Kai Havertz and Mason Mount would be the one he takes into the Premier League season.

‘So, it doesn’t matter what I have in my mind. All that matters what we see on the pitch. And I saw four accelerations in the second half, and they all came from Raheem. This is what he delivers.’

Despite plenty of possession Chelsea were wasteful in what some may see as an eye-raising loss which was watched by new co-owners Todd Boehly and Behdad Eghbali.

‘If we keep on struggling to not feel these things and to not finish these things off it will not be the first time that we get punished,’ a clearly unimpressed Tuchel said.

Sterling, 27, looked a little rusty but showed flashes of the explosive pace he will bring to Stamford Bridge.

Tuchel, however, will be concerned with a defence that gave up a number of chances before a Trevoh Chalobah handball – after Ethan Ampadu had given the ball away – gave Mexican Daniel Rios the opportunity to net a fully-deserved equaliser in a match delayed more than an hour thanks to thunderstorms in the Charlotte area.

Mount and Ben Chilwell (with the aid of a post) both tucked their penalties away before Gallagher’s casual attempt was foiled by Sisniega, Charlotte’s third goalkeeper of the evening, who remained still.

Charlotte confidently scored their first four penalties meaning Sterling had to convert his, which he did, the England man coolly slotting his effort into the left-hand corner, despite the antics of Sisniega on his line.

That meant it was left to former Derby County winger Kamil Joswiak, who sent Mendy the wrong way to delight a raucous home crowd as fireworks exploded.

Despite it only being a pre-season friendly, Tuchel – who claimed the hosts played with ‘more courage’ could have been forgiven for firing his own volley in the dressing room.

He also reacted with surprise when informed Tino Werner had said in a previous interview he could be ‘happy anywhere’, claiming he would be ‘the happiest person on the planet having a contract with Chelsea’.

He added that to nail down his slot in the starting XI Werner must ‘show quality and take your place and defend your place’.

Tuchel did, however, put things into context. ‘There’s no need for major doubts and for huge criticism,’ he said. ‘It’s never important what a manager has in his head before preseason. Whatever. It’s reality that counts, and every day in training and matches like these count. From there we go.’

Chelsea go back to their Orlando training camp, in a city where they face old rivals Arsenal in the final game of their tour on Saturday nigh

ALL THE ACTION AS IT HAPPENED…