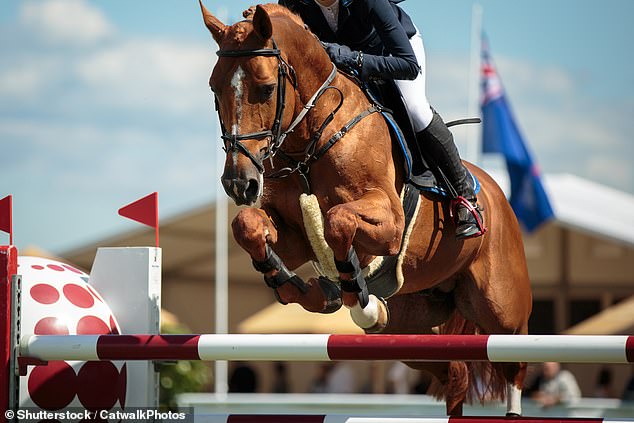 A four-year-old girl sustained injuries including permanent hearing loss when a horse fell on her at a country show jumping event, according to a NSW lawsuit.

They were the organisers of the NSW Country Show Jumping Championships on November 4, 2017.

A young girl who lost her hearing after a horse fell on her has had her court case moved to the Supremem Court after concerns her rewarded damamges could exceed $750,000

She is also suing Charles Sturt University, occupier of the premises where the event was held, and Chloe Mannell, the horse’s rider.

In the NSW Supreme Court on Tuesday, Justice Michael Walton granted an application by Scarlett’s lawyers for her civil lawsuit to be transferred from the District Court to the Supreme Court.

‘My overall impression is that there is a risk that the amount to be awarded, if the plaintiff is successful, may exceed the jurisdictional limit of the District Court,’ the judge said.

Her barrister has estimated the quantum of damages as between about $825,000 and $1.02 million, figures disputed by the defendants.

The little girl had gone to the championships with her mother and another child.

‘During the event, the horse came within a short distance to the plaintiff,’ the judge said.

The young girl’s barrister has estimated the quantum of damages as between about $825,000 and $1.02 million with the case now moved to the Supreme Court

‘It is alleged that the (rider) did not maintain control of the horse.

‘The horse fell and landed on the plaintiff.’

An issue between the parties relates to the duty and/or scope of the duty owed between the four defendants and Scarlett, as well as damages.

The judge said the evidence revealed that her injuries included a fractured skull, permanent hearing loss or severe deafness in the left ear, facial nerve palsy/paralysis, contusion to the lungs and moderate traumatic brain injury.

He referred to numerous medical reports including one from a clinical psychologist who said she suffered a moderate traumatic brain injury from which she has made a good cognitive recovery.

But he referred to behavioural and emotional changes which are affecting classroom engagement, relationships with siblings and social development.

The defendants submitted that the medical evidence did not support an assessment of damages above $500,000.

They noted that no physical limitations had been reported by the girl’s parents, except in relation to balancing activities, or her aptitude for household chores and recreational activities.

But the judge said the overall evidence lent support at this stage of proceedings to an assessment made by the girl’s barrister.

This ‘creates the impression that there is a risk that the value of damages may exceed the jurisdictional limit of the District Court if the plaintiff succeeds in her claim’.