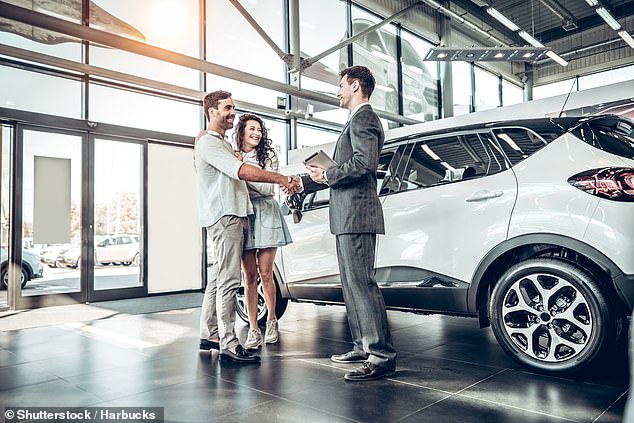 With inflation at a 40-year high adding fuel to the cost-of-living crisis, car buyers are being forced to delay purchases, reduce budgets and consider more affordable brands, according to a new report.

A What Car? poll of 1,232 people who are in the process of replacing their cars found that 37 per cent have decided to push back purchases due to the crunch.

Almost half have delayed placing orders for at least three months – and a quarter said they will wait until 2023 in the hope that the squeeze on finances eases.

However, other industry insiders say customers are pushing their car buying intentions back by months – and even years – due to the shortage of new models and extensive lead times on orders.

Cost-of-living impact on car buying: With inflation at a 40-year high adding yet more fuel to the crunch, drivers are being forced to delay their vehicle purchases, a new report says

Results from the survey were published within days of confirmation that UK inflation has surged to a 40-year high.

The headline CPI rate climbed to an eye-watering 9.4 per cent in June, up from 9.1 per cent the previous month.

To add to the pain for households, the Bank of England has hinted that it will hike interest rates by another 0.5 percentage points to 1.75 per cent next month to combat surging prices.

The CPI rate is predicted to soar to around 11 per cent in the autumn, when the cap on energy bills is due to rise again.

Steve Huntingford, editor, What Car?, said this will have ‘serious’ ramifications for the motor industry, with its research showing that car buyers are already planning to delay their purchases for the meantime.

‘Rising inflation is impacting the automotive sector with serious consequences,’ he said.

‘As our research shows, a significant share of buyers are revising their budgets, pushing back their vehicle purchase and considering different makes and models than before to offset the rising costs of living.’

The research also found that 40 per cent of buyers have changed either the make or model they’re considering due to the cost-of-living crisis.

Almost three quarters (72 per cent) are now considering a different make and model altogether, with most of these turning to more budget-friendly options.

The crisis is also affecting how much motorists are willing to spend, with over a third (35 per cent) of buyers telling What Car? they are reducing their budgets for their next car.

When asked how much they’ll lower their spending by, over one in five (23 per cent) said by at least a fifth, while another quarter of the poll estimated they will spend between 10 and 15 per cent less than they had originally planned.

Some said the recent cost-of-living squeeze had impacted their budgets so much that they are now looking for a used car rather than a new one.

Some 21 per cent said they have switched to the second-hand market primarily due to the ongoing financial crunch.

Auto Trader said the average second-hand car last month was £17,252 compared to £12,798 in June 2019. While rising used values are stabilising, they are unlikely to start tumbling, it said

That said, these drivers are unlikely to be able to make significant savings by entering the used market, with second-hand prices still £4,500 higher than pre-pandemic due to decline in new vehicle manufacturing and a shortage of zero-mile motors.

Auto Trader recently told This is Money that the average used car price last month was £17,262 – up from £12,798 in June 2019 – and while values are stabilising there is ‘no sign’ of prices falling any time soon.

What Car? also surveyed those who had bought a car, with 401 respondents taking part and found that a fifth (21 per cent) said the cost-of-living crisis had impacted their purchase decision in one way or another.

New car registrations in the first six months are over 100,000 units behind 2021 half-year sales, with fewer models being produced and delivered the key reason for this, says the SMMT

Yet other industry insiders say the ongoing short supply of new models – and customers being quoted extensive waiting periods of up to two years for orders of some cars – is what is triggering drivers to put their purchases on hold.

The Society of Motor Manufactures and Traders believes this is driving force for why just 802,000 new cars have been delivered to customers in the first six months of 2022 – that’s 107,000 fewer than last year, meaning a decline of 12 per cent.

The trade body’s latest report showed that last month was the worst June for sales on record since 1996.

Lisa Watson, director of sales at Close Brothers Motor Finance, said the ongoing ‘supply chain issues are causing more problems for the car industry than last year’s lockdowns’ and said it is ‘understandable’ that buyers are looking to delay purchases.

‘It’s completely understandable that buyers are unwilling to place orders for vehicles with no firm idea of delivery dates, but it’s disappointing that so many have lost confidence with what should be an exciting process of choosing a new car,’ she said.

‘The sector is working hard to improve lead times.

‘Our research shows dealers should work with buyers to understand where compromises can be made to get more cars on customers’ driveways as soon as possible.

‘If the supply chain crisis wasn’t enough, the industry is also starting to see the impact of cost-of-living pressures and record high fuel costs.

‘Prospective buyers, who may already be put off by delivery delays, will be considering their purchases even more carefully in the months ahead.’