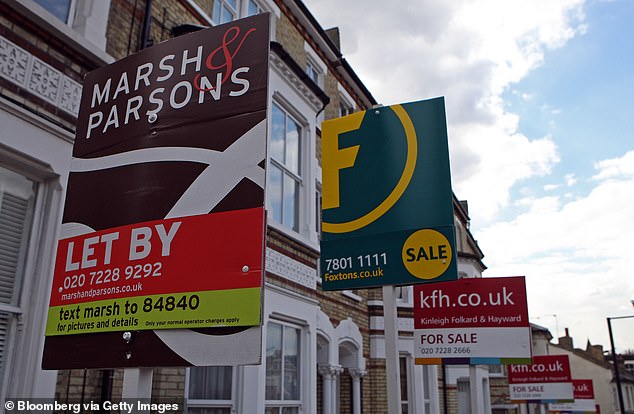 Meanwhile, in Wales and Scotland, the multiple was lower at six and 5.5 respectively, according to the latest figures from the Office for National Statistics.

The average home sold in England cost the equivalent of 8.7 times the average annual disposable household income, according to the ONS

However, affordability ratios in England are now worse than at any point since records began in 1999.

It has prompted housing experts to describe affordability as ‘borderline fictional’ for many people – and say that owning a home is fast becoming ‘fantasy’.

Andrew Montlake, of mortgage brokers Coreco, said: ‘With threadbare stock levels and a shambolic lack of homes being built, affordability ratios were already borderline fictional for many.

‘But with inflation and mortgage rates now rising, affordability is rapidly entering the realm of fantasy. Our property market is broken due to a lack of new homes being built and salaries rising nowhere near the rate of house prices. In many areas of the country, the UK’s property market is starting to resemble a science fiction novel.’

‘In the capital, the affordability crisis is beyond extreme. Insatiable demand from an ever-growing population, coupled with a limited supply of housing and a slowing production line of new build development will see a continued upward path of house prices.

‘Factor in low wage growth, rising rates and inflation and the outlook becomes even more bleak.’

The ONS said that the figures were calculated in the year ending March 2021. Since then, property prices have increased further while wage growth has failed to keep up with inflation.

Timothy Douglas, of the industry body Propertymark, said: ‘The sales market has so far continued to remain buoyant during turbulent times with homes selling extremely quickly. But with further potential interest rate rises on the cards and the cost of living crisis taking hold of many people’s finances, the latest data on housing affordability paints a concerning picture.

‘With 2021 affordability ratios of household income and median house prices having worsened to already worrying levels, we know that this year, this disproportion is only set to increase.’

He added that, while house price growth could slow towards the end of 2022, the supply of homes to buy would remain out of kilter with demand from homebuyers.

‘The current availability pressures within the market are a key factor to rising house prices but this is expected to start to slow at the end of this year,’ he said.

‘However, this will not be enough to level out the imbalance in supply and demand and current efforts being made are simply not going to deliver the right type of houses in the right places that we need on the ground to cope with demand.’

There are big regional variations in the ONS data, with an averagely-priced home in the North East costing the equivalent of almost 12 years of income for a low-income household, compared with 40 years in London.

The figures are based on median incomes, as both income and house prices are skewed with some extreme high values.

The ONS defines disposable income as the combined earnings, benefits, pensions and other income of a household, less the effect of direct taxes such as income tax, national insurance contributions and council tax.

The research highlighted how incomes were affected by the pandemic during 2021 and so are ‘more uncertain than unusual’.

Over a longer period, the ONS said that house price to earnings in England have increased since 2014 and are now beyond their 2008 peak. They have also nearly doubled since 1999.