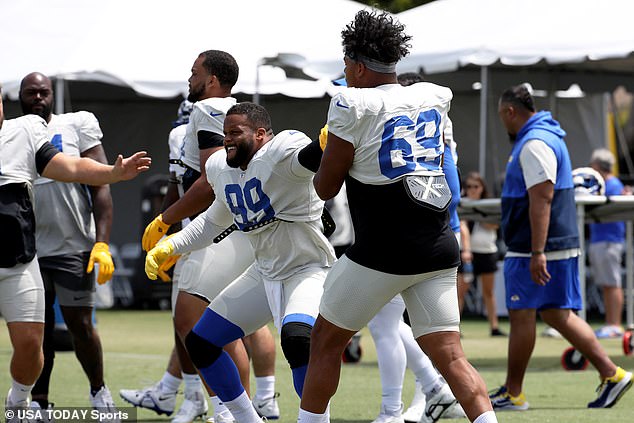 Aaron Donald baffled football fans Monday as footage of him grabbing teammate Elijah Garcia by the throat spread across Twitter.

In the clip, the three-time defensive player of the year bends his knees and keeps a grip on Garcia’s neck while shuffling to the side.

As Donald goes through his paces, Garcia’s head swings back violently multiple times before the bizarre drill is over.

Twitter users had a range of funny reactions to the clip.

Donald participated in the interesting drill as he prepared for his ninth NFL season.

Many sympathized with Garcia, an undrafted free agent rookie who was apparently used as the training dummy for the accomplished Donald.

Other users claimed that Donald and Garcia were not the only players performing the drill, with one even calling it ‘everyday’ for defensive linemen.

Other users just wanted to get jokes off.

Another asked, ‘What is the salary for designated choke recipient?’

Finally, one more had a claim that can only be considered preposterous.

‘I’m stronger than him,’ the fan said of Donald.

The Rams begin their preseason schedule with a game against the Chargers on August 13. They begin their season for real at the Bills on September 8.