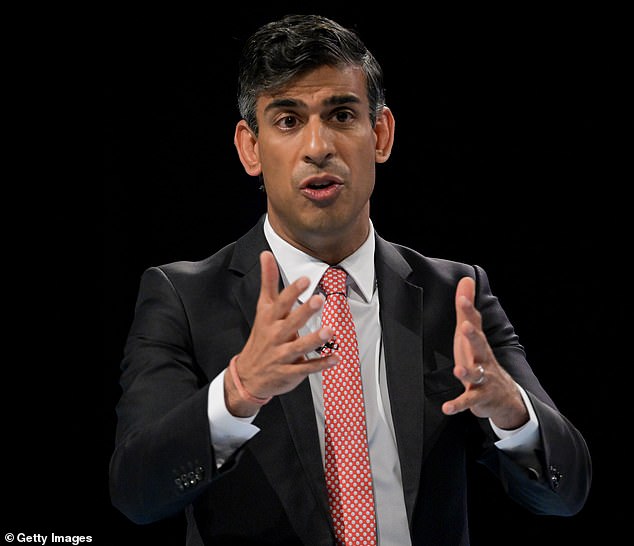 By Martin Beckford Policy Editor For The Daily Mail

Rishi Sunak has been criticised for promising tax cuts tomorrow – rather than providing help today for struggling families and businesses.

The former chancellor is also facing fresh accusations that he has performed a U-turn after he announced tax cuts just days after he had branded them immoral.

And he had to deny making his latest pledge – of slashing the basic rate of income tax from 20 per cent to 16 per cent within seven years – as a last-ditch attempt to revitalise his flagging campaign to become the next Tory leader.

The former chancellor, pictured during the second Conservative party membership hustings, is also facing fresh accusations that he has performed a U-turn after he announced tax cuts just days after he had branded them immoral

Yesterday Therese Coffey – a key backer of Mr Sunak’s rival Liz Truss – was asked if she was next in line to take over as chancellor. But the Work and Pensions Secretary insisted: ‘The only jobs that have been discussed is getting Liz to be PM.’

She went on: ‘And she’s a strong believer in getting on with some of those tax cuts earlier, rather than the mañana [tomorrow] promises that may be made, which only a week or two ago were deemed immoral.’

Asked by Times Radio if Mr Sunak’s promise of future tax cuts was because he is behind in the polls, Miss Coffey replied: ‘It’s for other candidates to make their minds up about which direction they’re going to take. But Liz has been consistent from the start.’

Asked if his income tax announcement was an attempt to rescue his leadership bid, Mr Sunak told BBC Radio 4’s Today programme: ‘No, no, definitely not. This is entirely consistent with what I’ve been saying for a long time. The first penny off the basic rate in almost 15 years was something I announced as chancellor.’

He said his long-term plan was ‘responsible’, contrasting it with Miss Truss’s vow to immediately reverse the recent national insurance hike and cancel the impending rise in corporation tax.

Yesterday Therese Coffey, pictured, who is backing Liz Truss, was asked if she was next in line to take over as chancellor but insisted that the only jobs being discussed are getting Liz to be the PM