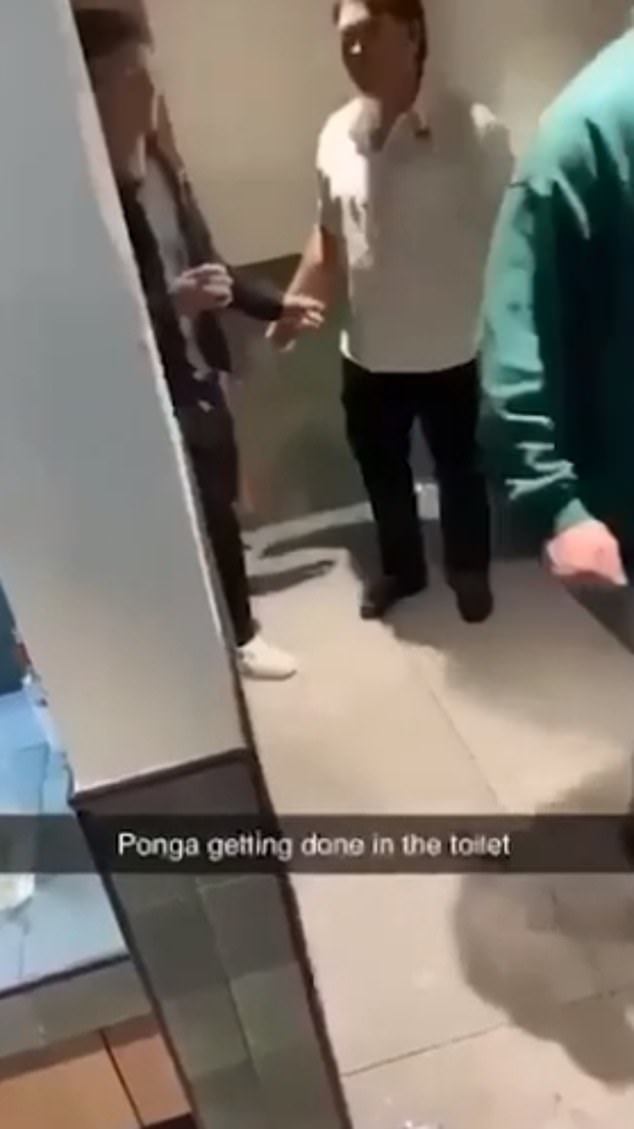 Kalyn Ponga’s excuse after footage emerged of the NRL superstar being asked to leave a toilet cubicle at a Newcastle pub on Saturday alongside Knights teammate Kurt Mann has been labelled a ‘fairytale’.

Ponga, 24, could lose his status as Knights co-captain following the incident, with the fullback asked to explain his actions by club management.

He is out for the season due to a succession of concussions.

In the short clip, Ponga and Mann are asked to step out of the cubicle. Both men then walk out, bourbon and Cokes in hand.

‘Oh, that’s a surprise,’ the security guard can be heard saying as the two footy players walk past.

Ponga was in the cubicle with his teammate Kurt Mann, sparking wild rumours in rugby league circles

Ponga’s father Andre offered an innocent explanation, telling News Corp the teammates were in the cubicle together due to his son being ill.

‘He (Kalyn) made an exciting house purchase on Saturday and celebrated with a few mates drinking,’ he said.

‘(He was) sick in the toilet and his mate (Mann) went in to help him.’

That didn’t wash with Fox League reporter James Hooper, who said, ‘You might have to get Pinocchio out again, we aren’t believing that fairytale are we?’

Co-host Braith Anasta pointed out it’s ‘not often you go to the toilets with a mate to throw up’ with Hooper adding the footage is a ‘bad scene’.

Speaking on Triple M radio, St George Illawarra prop Aaron Woods weighed in, pointing out that Ponga and Mann could be harshly punished after the club set a precedent by standing down Knights front-rower David Klemmer for a game after he abused trainer Hayden Knowles.

Ponga’s father Andre offered an explanation, telling News Corp the teammates were in the cubicle together due to illness – it was met with cynicism by many journalists and footy fans

Speaking on Triple M radio, St George Illawarra prop Aaron Woods weighed into the conversation, asking if Knights front-rower David Klemmer was stood down for a game after abusing trainer Hayden Knowles, the punishment for Ponga and Mann will be interesting

‘Remember (last week) the stink they kicked up about Klemmer swearing at the trainer,’ Woods said.

‘What will they do this week about two players on the beers when they should be at home?

Woods added Ponga that drinking while recovering from a series of concussions is the ‘worst thing’ for his recovery, while Mann is out of action due to a soft tissue injury.

The veteran front-rower also said if Ponga has done nothing wrong, he shouldn’t lose his status as the club’s co-captain.

In April, Ponga signed a multi-million dollar deal to stay at the Knights until the end of the 2027 NRL season.

A genuine match-winner on his day, Ponga’s time at Newcastle since 2018 has been hampered by injury.