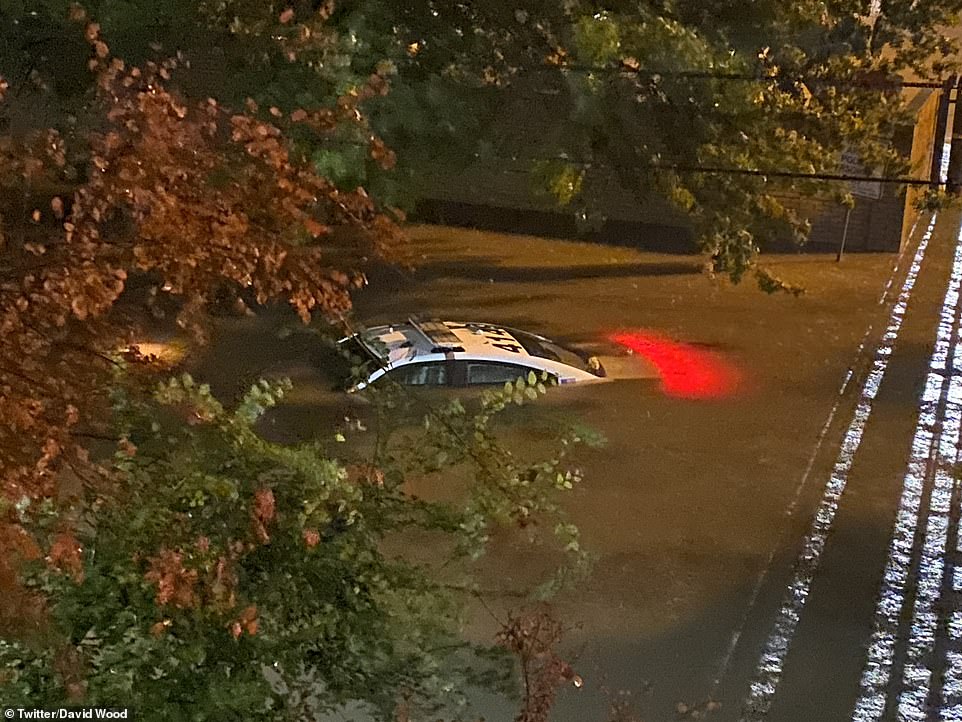 Dozens of people were rescued overnight as their cars were swept away in downtown Dallas after torrential downpours placed more than 14 million people across the southern Plains under flood watch.

Heavy rain caused flash floods in parts of the Southwest over the weekend, with even more forecast to arrive through Monday. On Saturday, Texas Governor Greg Abbott urged Texans to be vigilant.

Dramatic Footage posted overnight showed firefighters in Dallas using ropes to rescue people from their stranded cars on the I-30 highway, with one of the first responders shown swimming to reach a man in deep water.

The drone footage shows the man out of his depth, struggling to keep his head above the murky water, before he is finally rescued. Meanwhile, a women can be seen clinging onto the back of a car, which appears to be partially floating. Another car can be seen completely underwater in the video posted by YouTube channel WXChasing.

Other footage from the Dallas-Fort Worth area showed more people stranded in their cars or wading around their vehicles in the deep flood waters in the middle of city streets.

Photographs from outside a Dallas Police Department building in Downtown Dallas showed cars – some of which appeared to be police vehicles – completely submerged in flood waters and drifting down the street.

More than 14 million people were placed under flood watches on Sunday as pictures showed people being rescued from their cars and vehicles floating down the streets of Dallas, Texas overnight. Pictured: A police car is seen submerged below floodwaters in Dallas

Mon Lun pulls a strap attached to his water stalled car, towing it out of flood waters in Dallas, Monday, August 22

About three to five inches of rain fell across the Texas-Oklahoma border, with a further four to eight inches forecast on Monday over an area that includes the Dallas-Fort Worth metroplex, and Shreveport, Louisiana.

Some areas may even get more than eight inches of rainfall, forecasts showed, causing excessive runoff which may result in flash flooding.

As a result, more than 14 million were placed under flood watched on Sunday, according to CNN.

The National Weather Service office in Fort Worth/Dallas warned: ‘We don’t know which areas will receive the 8+ inches of extreme rainfall, but if it does occur near you, significant flash flooding will result. ‘Everyone in the watch area should plan on extra commuting time, especially on Monday morning,’ the weather service added.

The NWS said that heavy rain effecting Northern Texas is expected to move east towards the Mississippi Valley.

While the rain will be welcome in many regions due to the on-going drought, urban areas and other places with poor drainage are at risk of flash floods. Flooding is exacerbated by dry ground caused by the droughts, which leads to more runoff in areas that would normally absorb water into the soil.

Speaking on a video call on Saturday with more than 350 local emergency response officials, Governor Abbott called on people to be aware of the dangerous weather conditions and to listen to local officials.

‘I urge Texans to remain alert about changing weather conditions, take the active weather threats seriously, and heed the guidance of local officials as storms bringing rain and flood concerns push through our state,’ he said.

‘The State of Texas is using all means necessary to support local community efforts to protect life and property, and it’s essential that communities across the state take proactive measures to keep all Texans safe.’

More dramatic footage of the submerged I-30 highway showed multiple stranded cars. Cassondra Anna Mae Stewart, who filmed the footage, was left stranded for two hours on interstate-30 whilst trying to get home.

The video shows multiple cars and emergency vehicles stuck in the flood, which has covered both sides of the highway and even trapped vehicles under the bridge.

Cassondra said: ‘It took me over two hours to get home! It’s flooded all over downtown – the highway and the streets surrounding it too. Luckily I was able to reverse up a ramp nearby and get off the highway so I could actually get home. I’m so glad I’m safe now!’

Pictured: Cars are seen driving through deep waters in Fort Worth, Texas, on Sunday night

Pictured: Drivers navigate their vehicles through floodwater in Fort Worth, Texas

Pictured: Drivers brave the deep water in their vehicles in Texas. In the left-hand image, a car is seen driving past as a burst pipe spews water onto the road

Pictured: A car is seen stranded in the Dallas-Fort Worth area, while a man in a high-vis jacket inspecting the vehicle

Pictured: A map released by the National Weather Service shows the region in Texas (marked in red) where heavy rain and flash flooding is expected in the coming days

Elsewhere, a storm system from Ohio Valley is expected to bring severe weather to the East Coast next week, possibly flooding certain parts of the Northeast with heavy rain after a summer of drought.

The region is currently experiencing the realms of a drastic drought, similar to other areas in the U.S., noticeably in California, the southwest, and Texas.

Areas likely to be issued flash flood warnings from Monday until Tuesday morning are mostly in eastern Pennsylvania, including Scranton, Allentown, and Philadlephia.

Southeast New York state, such as Utica, Binghamton, Albany and Kingston, as well as part of southern New England, including Boston, Hartford and Providence will also be targeted although rainfall in these areas is expected to last up to three days.

Another destination likely to experience flash flood threats for the first two days of the new week is New York City, according to Fox Weather.

‘Some of the (rain) totals look pretty impressive, especially into the higher elevations. We could get a little bit of lift,’ Herrera added.

‘We could get some numbers closer to two or three inches over into portions of northern Pennsylvania, into portions of New Jersey, New York as well, and right into Massachusetts where we need it as well.’

No more than one-to-two inches of rain is expected to fall in Pennsylvania as well as New England.

New York City, Hartford and New London, Connecticut, could tally up to two inches of rainfall until Wednesday.

That should end the ‘flash drought’ that’s been in the Northeast for much of this summer, as states like Connecticut, Rhode Island, Massachusetts, New Hampshire and Maine all experienced below-par levels of precipitation throughout the summer.

Boston reported nearly six inches of rain under normal standards, having cumulated only a little more than three inches of rain since June 1. Another example of low rainfall is Newark, New Jersey, where precipitation levels are almost eight inches below average.

A tornado near McComb, Ohio, where no more than two inches of rain are expected in the area on Sunday night

Fans walk about while play resumes after a rain delay during the Western & Southern Open tennis tournament, Saturday, August 20, 2022, in Mason, Ohio, as severe storms loom in

The heat in the area was so concerning that residents in some northeastern states were asked to be prudent with how they used water.

Connecticut Governor Ned Lamont asked residents to use less water in mid-July in the hope of prolonging the drought.

Meanwhile, on Sunday evening, severe thunderstorms and high winds are expected to go across the Ohio Valley and into the Appalachians.

The storm will go south into the Mississippi Valley before its expected arrival in the Northeast a day later.

Residents in cities including Erie, Pennsylvania; Columbus and Cincinnati, Ohio; as well Nashville and Memphis, Tennessee, are projected to endure heavy rainfall and potentially tornadoes through most of Sunday.

Several areas of the Ohio Valley could end up with one-to-two inches of rain if more severe weather evolves.