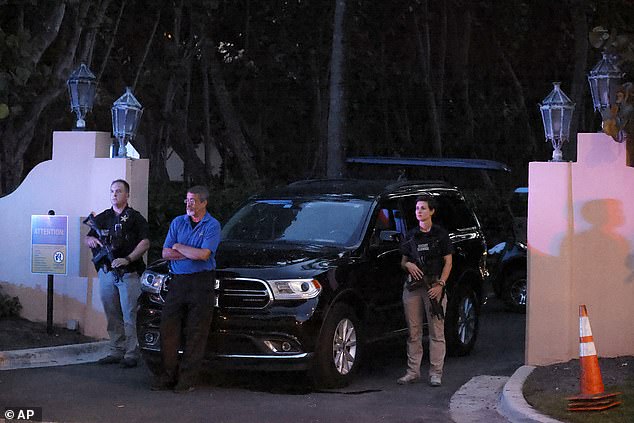 Donald Trump took 300 classified documents with him when he left the White House, reports say.

The scale of the former president’s cache of files is what pushed the Justice Department to launch their unprecedented raid on August 8, according to The New York Times.

The paper reported the first tranche of 150 classified documents were returned to the National Archives in January.

Some of the rest were returned in June, and the remainder were seized in the August raid on Mar-a-Lago.

In the August search, FBI agents removed 26 boxes, including 11 sets of material marked as classified.

One set had the highest level of classification, top secret/sensitive compartmented information.

Agents stand guard outside Mar-a-Lago on August 8, as the FBI was searching the property

Boxes of documents and personal items are seen being moved out of the White House in January 2021, as Donald Trump moved out

Trump, seen at Trump Tower in Manhattan on August 10, on Monday has sued the federal government and asked for a special master to determine what materials seized from Mar-a-Lago can be used in the investigation into him

The suit filed by Trump on Monday, seeking to have a ‘special master’ oversee the investigation into the documents, includes an itemized list of property the FBI seized and seeks a more detailed accounting. One box contained ‘Miscellaneous Top Secret Documents’

It remains unclear what the classified material discussed. A receipt made public following the August search said there were classified documents relating to French president Emmanuel Macron and documents detailing the clemency Trump granted to his longtime backer Roger Stone.

The paper reported the 15 boxes Trump handed over in January – nearly a year after he left office – included documents from the CIA, the NSA and the FBI.

Trump reportedly went through the boxes himself in late 2021 before handing them over.

On Monday, Trump sued the federal government and asked for a special master to determine what materials seized from Mar-a-Lago can be used in the investigation into him.

The former president filed the lawsuit in the US District Court in the Southern District of Florida saying his Fourth Amendment rights had been violated by the seizure of certain documents, including two of his passports.

It comes as a magistrate in Florida prepares to decide whether to unseal the search affidavit that led to the raid earlier this month.

‘Politics cannot be allowed to impact the administration of justice. President Donald Trump is the clear frontrunner in the 2024 Republican Presidential Primary and in the 2024 General Election, should he decide to run’, the lawsuit reads.

It adds that the raid on Mar-a-Lago was ‘shockingly aggressive’ and the move showed ‘no understanding of the distress that it would cause most Americans.’

‘Like all citizens, (Trump) is protected by the Fourth Amendment to the United States Constitution. Property seized in violation of his constitutional rights musty be returned forthwith’.

The lawsuit pivots between constitutional arguments about rights to protection from unreasonable search and seizure to some of Trump’s long-held grievances.

It says the DOJ and FBI have treated Trump ‘differently than any other citizen.’

It says ‘text exchanges between the lead agent (Peter Stzrok) and his paramour (Lisa Page) reflect their complete disdain and bias against President Trump and his supporters, while they were entrusted with probing the farcical Russian collusion claims.

That is a reference to the FBI ‘lovers,’ lawyers who worked on the probe who were found to have exchanged anti-Trump tweets.

A background preface leading up the extraordinary raid describes the move by Trump and former first lady Melania Trump to Mar-a-Lago after the 2020 election.

The suit demands a special master oversee materials seized in the FBI’s raid of Mar-a-Lago, and calls Donald Trump the ‘clear frontrunner in the 2024 Republican presidential primary’

‘Mar-a-Lago is a historical mansion with 58 bedrooms and 33 bathrooms on 17 acres of land extending from the Atlantic Ocean to the Intracoastal Waterway,’ the suit points out. A DOJ official was shown a storage room where government documents were stored alongside clothing

The lawsuit gives voice to Trump grievances, like the ‘FBI lovers’ Peter Strzok and Lisa Page, who worked on the Russia probe

‘On January 20, 2021 President Trump and his family left the White House. They moved back to their home at Mar-a-Lago in Palm Beach, Florida.

‘Mar-a-Lago is a historical mansion with 58 bedrooms and 33 bathrooms on 17 acres of land extending from the Atlantic Ocean to the Intracoastal Waterway, hence the name, which means sea-to-lake,’ says the suit – incorporating language that could be found in a glossy real estate brochure.

The suit describes a June 3 visit by DOJ official Jay Bratt, which came amid back-and-forth about government materials held at Mar-a-Lago.

At one point, Bratt and a group of officials, led by two Secret Service agents, visited a storage room where archival documents were held.

‘The storage room contained boxes, many containing the clothing and personal items of President Trump and the first lady,’ the suit notes.

Trump’s lawyers filed the suit two weeks after the raid.

A US Magistrate judge hearing that case said in an order on Monday that Trump had not intervened in the case.

The suit says that after Trump and his family ‘settled back into their home,’ Trump ‘voluntarily asked [the National Archives] movers to come to Mar-a-Lago to receive 15 boxes of documents.’

The suit also puts forward the possibility that Trump will argue in the court that the retrieved documents – including some at the top government classification levels – had been declassified by him.

The suit argues that an internal DOJ ‘taint team’ or ‘filter team’ would not sufficiently protect Trump’s rights.

‘President Trump determined that a search for documents bearing classification markings should be conducted – even if the marked documents had been declassified,’ it says.

The suit says his staff conducted a ‘diligent search.’

A Palm Beach police officer is seen outside Trump’s Mar-a-Lago estate on August 9, the day after the raid

Authorities stand guard outside Mar-a-Lago on August 9. Trump was in Manhattan at the time of the raid

Trump also addressed the suit in a statement from his Save America PAC.

He called it an ‘unnecessary, unwarranted, and unAmerican Break-In by dozens of FBI agents, and others, of my home, Mar-a-Lago.’

He added: ‘They demanded that the security cameras be turned off, a request we rightfully denied. They prevented my attorneys from observing what was being taken in the raid, saying ‘absolutely not.’

‘They took documents covered by attorney-client and executive privilege, which is not allowed. They took my passports. They even brought a ‘safe cracker’ and successfully broke into my personal safe, which revealed…nothing!’ Trump wrote.

‘We are further demanding that the DOJ be forced to turn over a REAL, without ‘plants,’ inventory of my property that was taken and disclose where that property is now located.

‘We are demanding that all items wrongfully taken from my home be IMMEDIATELY returned,’ he continued, returning to his accusation, without providing evidence, that FBI agents planted material during the search.

Then, after blasting the raid again, Trump says he wants to get the documents back so that he can return them to the government for use in a Trump presidential library.

‘This Mar-a-Lago Break-In, Search, and Seizure was illegal and unconstitutional, and we are taking all actions necessary to get the documents back, which we would have given to them without the necessity of the despicable raid of my home, so that I can give them to the National Archives until they are required for the future Donald J. Trump Presidential Library and Museum,’ he said.