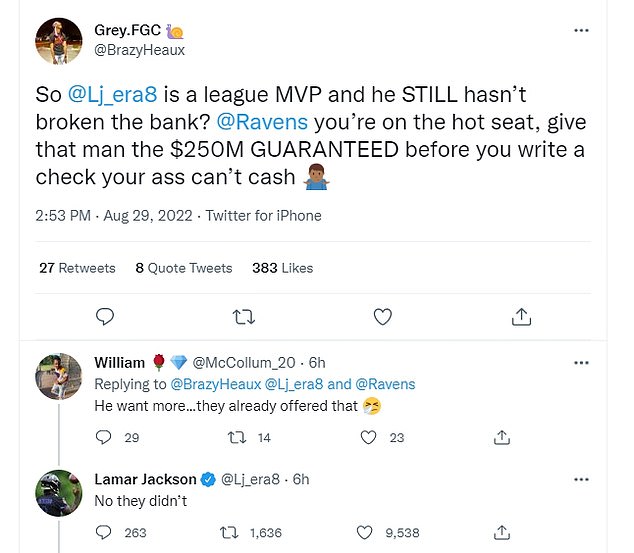 Lamar Jackson has not said much about his ongoing contract talks with the Baltimore Ravens but he has finally said something noteworthy in regards to a recent report.

A fan on twitter mentioned the deal that Baltimore reportedly offered Jackson, which according to Fox Sports’ Jay Glazer was worth more than the $230 million that deal the Arizona Cardinals signed Kyler Murray to.

Jackson simply replied to the tweet saying ‘no they didn’t’.

Jackson’s on going contract negotiations have been hot topic among NFL fans and media members. Both have spent months debating not only how much money former-MVP is worth, but if also if he should hold out until he gets a deal in order to avoid injury.

Earlier in the preseason Jackson told reporters that the sides would have until before the season to come to a deal or negotiations would be put on hold.

If a deal cannot be reached before then, Jackson – who does not have an agent – will be playing this season on the last year of his current deal, a fifth-year option worth more than $23million.

Jackson has electrified the NFL over the last four years, displaying unbelievable athleticism for any athlete. Let alone a quarterback.

Throughout his four years in the NFL Jackson has been not only one of the most electrifying, but also the most productive players in the NFL. He has recorded 9,967 passing yards, 84 passing touchdowns, 3,673 rushing yards and 21 rushing touchdowns, en route a 37-12 record as a starter.

Jackson has done all this while throwing to what has often been described as a sub-par receiving core over the years.

The Ravens have also reached the playoffs in three of Jackson’s four seasons, with the one outlier coming when he missed the final stretch of the season with an ankle injury. Baltimore’s last playoff run in 2020 even included Jackson’s first playoff win, after defeating Tennessee 20-13 in the wildcard round.

All of these accolades have lead people around the league to believe Jackson should command a salary in the same neighborhood as, if not more than Deshaun Watson’s $46million per year.

ESPNs’ Robert Griffin lll, even went as far as to say Jackson should be the first $50 million quarterback in the NFL.

Ravens fans seemingly agree with Griffin’s claims and may soon be hoping to see their star quarterback sign a deal worth $250 million or more.

Jackson sent some fans into a stir after he liked a picture showing him in  a Miami Dolphins jersey. Only hours after word of the liked photo spread a gofundme page was created with the title ‘Keep Lamar in Baltimore’.

Jackson swaps jersey with his close friend Marquis ‘Hollywood’ Brown after preseason game. Brown was traded from Baltimore to Arizona this offseason.

As of now it seems more likely that Jackson will not have a new deal when the Raven’s start their season on September 11th with a trip to Metlife Stadium to play the New York Jets.

If Jackson does not resign at some point before this offseason it would be all but guaranteed that the Ravens franchise tag him for at least a year.

If Jackson were to be tagged it would allow him the opportunity to not only play the 2023 season on a substantial raise, but also command more money after seeing what other top quarterbacks are given major deals first.