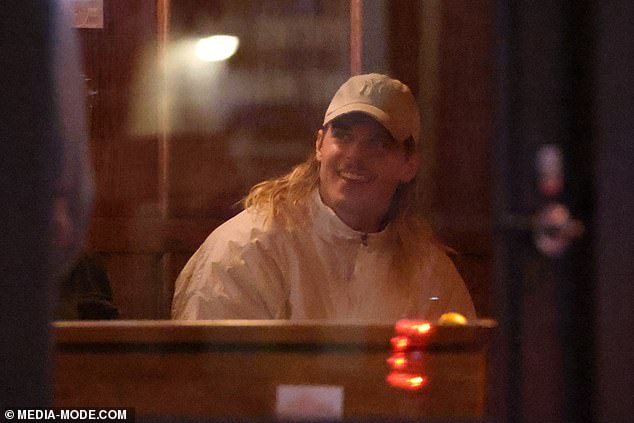 The Western Bulldogs washed down the disappointment for their dramatic elimination final loss against Fremantle with a Mad Monday session.

The party stretched into the evening with some players – including Bontempelli – keen for kick ons while Smith and a handful of players stayed to play pool at the venue.

Not all of the players made it to the evening celebrations, though, with Zaine Cordy looking slightly worse for wear and needing to be carried to a taxi before the sun went down.

The celebrations clearly took their toll on Cordy, who could be seen sat outside the venue slightly worse for wear as he waited to be carried out to a waiting car by Liberatore and Dunkley.

Western Bulldogs had a disappointing end to their season, getting knocked out in the first round of the finals after making the grand final last year – but all that seemed to be forgotten as they celebrated the end of their campaign

The result set up a semi-final against Collingwood at the MCG next Saturday for the Dockers, but spelt the end of the road for the Dogs, who lost the Grand Final to Melbourne 12 months ago.

And unfortunately for Bulldogs fans, there were eerie similarities between the two games and not just because Saturday’s defeat came at the same venue where they suffered last year’s humiliating 74-point grand final loss to Melbourne.

Liberatore and Dunkley eventually carried Cordy out to a waiting car

Twelve months ago, the Demons kicked six goals in 15 minutes in the third term to turn a 19-point gap into a 24-point lead at the final change, before booting nine majors the Bulldogs’ one in the final term.

Trailing 42-1 nine minutes into the second term, the Dockers booted 10 of the next 11 goals to set up a famous win.

‘We were up by 40, it’s a significant swing and it’s bloody disappointing,’ said Bulldogs coach Luke Beveridge, who cautioned against comparing Saturday’s loss to their grand final defeat.

However, he conceded it was difficult to know whether the ‘trauma’ of that loss had lingered over the course of the season.

‘We felt at different stages, with one or two of the significant wins, that we were definitely moving beyond that.

‘But all of us as individuals, when we think about what we’re capable of, we’d self reflect and say, ‘I think I can be more consistent’.

‘That’s what we have to strive for next year.’