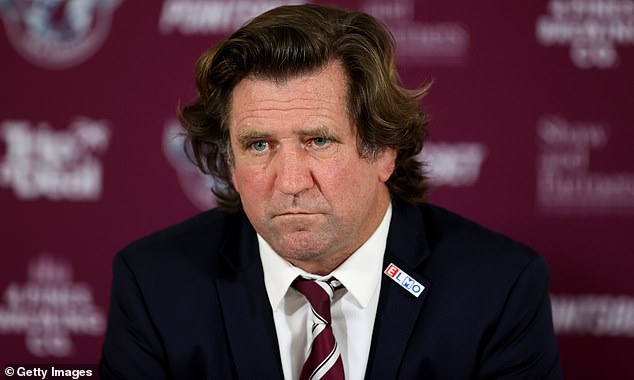 Manly coach Des Hasler is said to be weighing up whether he will walk away from the troubled NRL club – effective immediately.

It would be a remarkable scenario given the 61-year-old guided the Sea Eagles to the top four – and a preliminary final – only last season.

It is understood if Hasler is unable to secure stability from the club’s owners, he will quit.

Off contract at the end of 2023, Hasler is craving a new deal for 2024 before then shifting into a new role at the club where he has won four premierships as a player, then head coach.

At this stage, Sea Eagles management – headed by CEO Tony Mestrov and owner Scott Penn – are not budging on Hasler’s request.

One source close to Hasler said: ‘The longer this goes on, the more unstable it is for the players and football management and the more untenable Des’ employment for 2023 becomes,’ the Daily Telegraph reported.

‘You can’t have a high-performance environment without stability.’

It was reported Hasler was offered a new one-year extension for 2024 – but club management have rejected speculation that offer was tabled.

With preseason training starting in November, Manly’s players could see an absurd situation where Hasler and his two assistant coaches have moved on.

Chad Randall is believed to be considering an offer from incoming Bulldogs coach Cameron Ciraldo and Michael Monaghan may join Kieran Foran at the Titans.

They all boycotted the match in extraordinary scenes.

Reports of a rift between captain Daly Cherry-Evans and inspirational lock Jake Trbojevic have also been denied – but the pair were spotted at a café on Sydney’s northern beaches last week, apparently sorting out their differences.

If Hasler leaves what many believe is a sinking ship, the club will be in complete disarray.

The premiership contenders will have to rebuild – and if superstar fullback Tom Trbojevic seeks a release due to the instability said to be engulfing the club, chaos could follow.