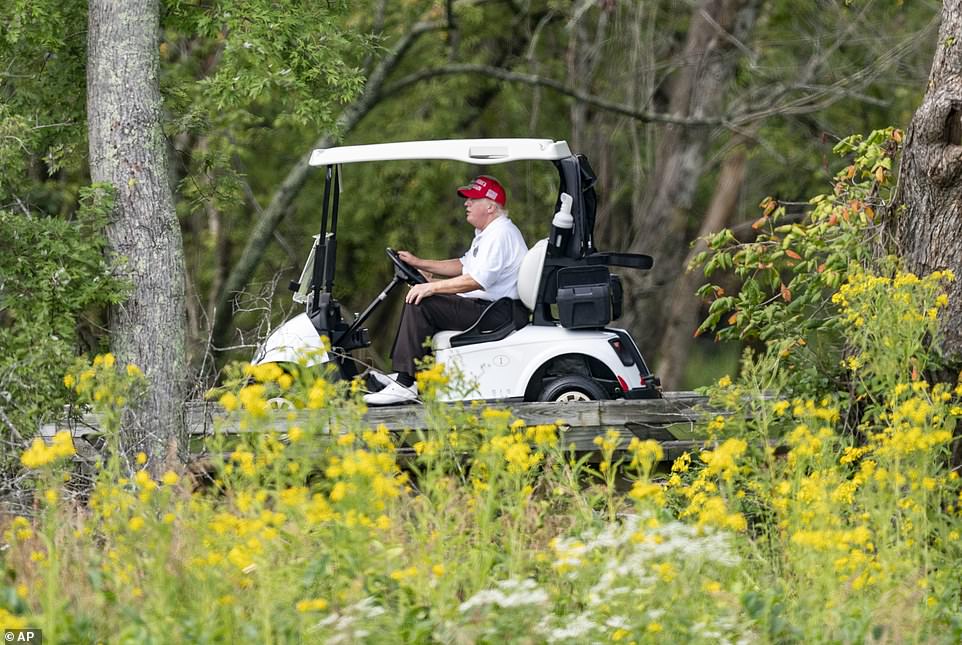 Donald Trump was photographed Monday on his golf course without clubs, but surrounded by a group of advisers that appeared to include his former White House lawyer Ty Cobb.

Trump and the group drove around in carts and stood on the green – but played no golf at his course in Sterling, Virginia just 25 miles outside Washington, D.C.

One of the members of the group, which included Trump’s son Eric, appeared to be Cobb, who told CBS News on Sunday that he believes the chances of the former president facing an indictment are ‘very high’ and will result in a ban on him running for office again.

He said a potential charge could be due to the ongoing FBI probe into classified documents at Mar-a-Lago, but added Trump is more likely to be indicted over his connection to the January 6, 2021 Capitol riot.

In one photo, Trump appeared to be having an animated discussion with him while driving his golf cart.

Donald Trump was pictured at his D.C. outskirt golf course on Monday without any golf clubs

Trump was seen standing on the Sterling, Virginia course with a group of men on Monday, September 12. The images did not show the men playing golf or with any golf clubs in sight

The man resembling Cobb was wearing jeans – not typical attire for a day on the links.

Cobb served on the Trump administration’s legal team from July 2017 to May 2018.

‘Many are asking me why Mr. Mushroom Putter was at his DC Golf Course (which is really in Virginia)? He says to play golf,’ tweeted Michael Cohen, Trump’s one-time attorney and ‘fixer.’

He added: ‘My sources say he was meeting with 2 lawyers in secrecy and didn’t trust being at their offices. Notice there are no golf clubs on the cart!!!’

Michael Cohen, a longtime but now estrange lawyer and ‘fixer’ for Trump, said ‘my sources say he was meeting with 2 lawyers in secrecy and didn’t trust being in their offices’ so they met at the course instead. He also noted the lack of clubs

Trump said Monday around noon that he was ‘working today’ at his Sterling, Virginia course and included a link to the property – fueling some speculation that he could be considering selling the club

The former president landed dressed in his sports gear before being whisked away in a black SUV and departing the airport 30 minutes after arriving around 6:00 p.m.

The images sparked claims that Trump could be indicted by the DOJ amid its explosive probe into his handling of classified documents after leaving office.

Despite the rainy weather the ex-president was later pictured golfing at his Virginia course just a short drive away from Dulles.

Trump tweeted around noon on Monday that he was ‘working today at @TrumpWashingtonDC on the Potomac River. What an incredible place!’

He also provided a link to the property, which led some to question whether he was looking at selling his Virginia golf club.

‘It’s been arraigning — I mean, raining,’ he added.

‘I have zero indict — I mean, insight — into what’s happening here,’ Conway clarified in another satirical slip up.

The FBI raided Trump’s Mar-a-Lago residence on August 8 to recover a slew of materials he took from the White House when leaving office.

The DOJ warns that the documents removed and classified materials improperly stored could cause a breach to U.S. national security.

Trump arrived at Dulles International Airport outside Washington, D.C. on Sunday evening wearing golf shoes, a polo and a brown jacket when he deplaned without his usually large entourage

George Conway, husband of former Trump counselor Kellyanne Conway, noted that it hasn’t been ‘golf weather’ in D.C. lately, suggesting the former president is in town for other reasons

A comparison shows Trump on Monday (left), where no gold clubs are present on the cart, and in July (right), where golf clubs are held on the back of his cart during The LIV Golf Invitational his Bedminster, New Jersey club

In February, Trump handed over 15 boxes of presidential materials to the National Archives after it was revealed he did not cooperate with the Presidential Records Act, which requires presidents to preserve all materials from their service.

The act notes that records do not belong to the office holder, but to the people.

A re-surfaced DailyMail.com video shows Trump boarding a private jet loaded with file boxes in 2021 – amid rumors he could be indicted for having classified documents at his Mar-a-Lago mansion.

The May 2021 video shows the former president and former first lady Melania decamp to Trump’s golf club in Bedminster, New Jersey after wintering in Florida after they left the White House.

The original report said that ‘aides appear to have carried a number of boxes onto the flight.’

What the public didn’t know at the time is there were tense exchanges between government lawyers and Trump’s representatives at the time over boxes of material from the Trump White House that was taken to his private Florida club.

The video has now resurfaced in light of the DOJ’s investigation, as well as due to its timing – just three days after the feds contacted Trump’s representative to request the return of government materials.