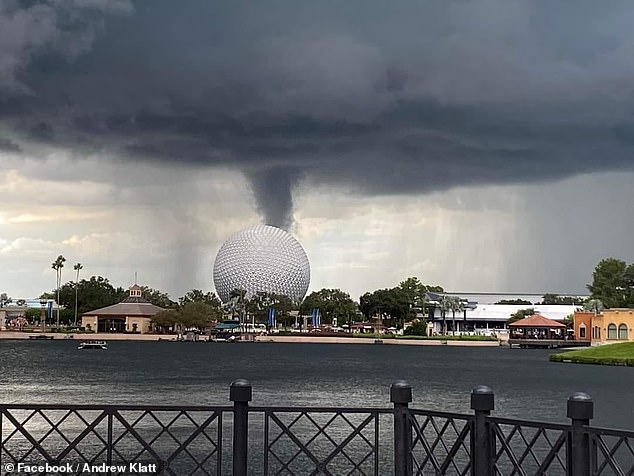 Apocalypse Disney! Massive thunderstorms and a sinister funnel cloud send Epcot guests scrambling for cover, as Orlando residents say they’ve ‘never seen anything like that in this area’

By Sophie Mann For Dailymail.Com

On Thursday, guests at Disney’s Epcot park were left stunned and concerned as they watched funnel clouds roll through the most magical place on Earth as strong storms made their way through Central Florida.

The out-of-this-world storm clouds were captured on video by guests at Epcot who ran for cover as the inclement weather threatened to ruin their day at the park.

The clouds, which appear to hover very close to the ground, began gathering in Orlando at about 6:20 p.m. Thursday. The National Weather Service issued a warning for brief funnel clouds in the storm as it passed over the Orlando Metro area.

The clouds, according to NWS, are harmless, but on rare occasions, they can briefly touch down, producing wind gusts over 50 mph.

In order to gain the designation of a tornado, the clouds would have needed to touch the ground, which they didn’t.

But it the lightning strikes and severe weather was enough for events to get canceled, like the Harmonius show at Epcot.

‘We were attending Epcot to go to one of their concerts. We have been local residents for over 16 years, and we had never seen anything like that in this area,’ Disney streamers Adam and Kristen said.

No damage was done by the apparent funnel cloud, but it did cause quite a tizzy at the popular amusement park.

Meteorologists advised people to move inside and report when they see a funnel cloud to the National Weather Service.

Florida sees more thunderstorms than any other area of the country, especially during the summer months. Funnel clouds and tornados are much rarer occurrences in Florida.