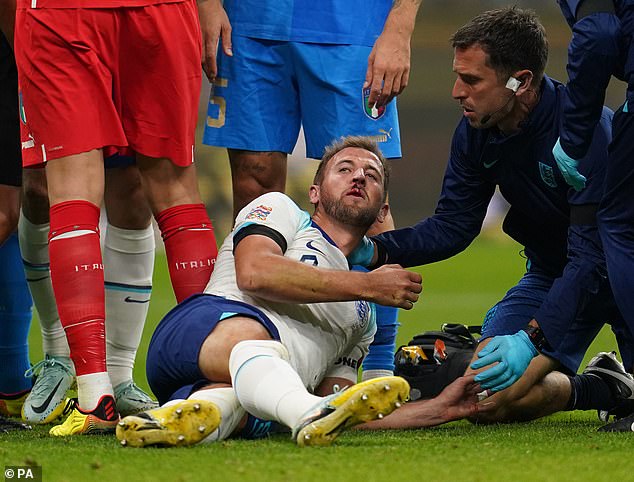 England captain Harry Kane was left with blood pouring from his mouth after a heavy collision with Italy’s Rafael Toloi during their Nations League match on Friday.

The 29-year-old Kane collided with the Atalanta defender as he was going for a header during a corner seven minutes into the second half.

Medics were quick to come to Kane’s aid, as he appeared to be in a significant amount of pain.

The England captain had blood gushing from his mouth as the medics held him up in a seated position as they checked on him.

However, after the usual medical checks to ensure it was not a more serious injury, the Tottenham man was able to continue his involvement in the game, a crucial fixture in England’s Nations League campaign in a bid to avoid relegation.

Kane could not make a difference though as England fell to a 1-0 defeat after Giacomo Raspadori’s 68th minute strike.

It means England will play in the second tier of the Nations League the next time the competition comes around.

England have failed to win any of their five Nations League group matches so far, with their loss to Italy their third following two defeats to group leaders Hungary.

Gareth Southgate’s side have one last group game to go through, as they host Germany at Wembley on Monday – their last match before the World Cup gets underway in November.