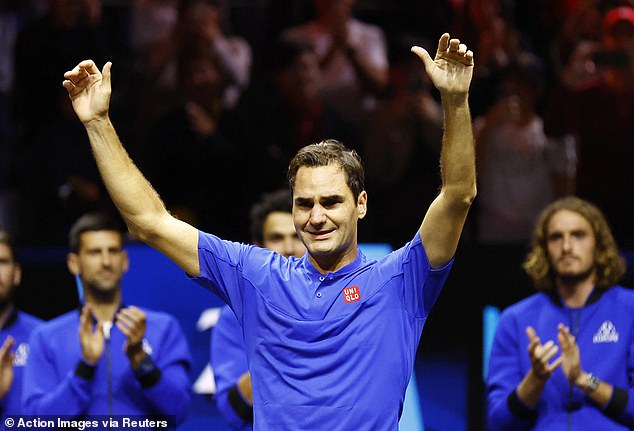 Long before the first changeover you knew that this was no ordinary doubles match taking place in London.

Roger Federer had just held serve to make it 2-1 when a video tribute was played, proposing a ‘Toast To Roger’ and including a tribute from his partner, Rafael Nadal.

All sponsored by the Swiss legend’s chosen champagne brand, of course.

This intersection between commercialism and the sporting history was somewhat unwelcome on an evening that already stood on its own, with more than 17,000 flocking to the 02 Arena to bid farewell.

It ended with defeat and tears from Federer, but a better memory to take away was the final sight of that liquid backhand in a competition environment. Also that nimble footwork which looked to have survived reasonably well the three surgeries that have brought his glorious career to an end.

With that first service game there was a reminder, too, that perhaps nobody has ever been able to land their delivery with such effortless precision.

The underlying fact was that he had not played any kind of match in fifteen months. You would barely have known it and he was the more solid of his pair.

The record will show that Federer’s last appearance ended with a 6-4 6-7 11-9 defeat against Americans Frances Tiafoe and Jack Sock. Let it also show that the 41 year-old went through it without his serve being broken.

It will be forgotten that it left the opening day score at 2-2 between Team Europe and Team World at an event named in honour of Rod Laver, who had a prime seat in the stands to witness it.

Amid all the hoopla and adoration Federer remained competitive to the last, although he and Nadal often looked to find the whole thing a hoot, sharing jokes at the changeovers with their team-mates.

There was some serious strategy as well, with Novak Djokovic leaning in to make suggestions about where to make their opponents play the first shot of the rally.

There might be reservations about the confected nature of this tournament, but there is no question that it brings into play things you could never hope to see elsewhere.

When Djokovic poked his head in to impart a bit of wisdom there was a brain trust right there with 63 Grand Slam titles between the three of them.

An assortment of public figures had flocked to the 02 to pay their respects, from different walks of life that reflect Federer’s multiple interests.

There was Vogue editor Anna Wintour, his unofficial superfan who has followed him all round the world to watch. Stefan Edberg was there, the flowing Swede whose game the young Federer so admired growing up. So was adventurer Bear Grylls, a friend with whom he has filmed mountain adventures in Switzerland.

The whole event has the feel of Wintour’s magazine, very much in line with the image that Federer has projected his whole career.

The brand is very much of a premium sort with ticket prices to match, sponsored by upmarket companies promoting an upmarket lifestyle, not entirely in keeping with today’s straitened times.

Federer’s tennis, his appearance, has always had a luxury feel to it, and there has never been a shortage of corporations keen to be associated.

By the time they walked on to the striking black environment of the arena to a cacophonous ovation it was gone 10pm.

The superstar’s tennis, like his appearance, has always had a luxury feel to it

Andy Murray had gone down in a lengthy singles encounter which, by the end, had given a sense of the support band playing a little too long before the headline act.

Nadal and Federer played together in the Laver Cup’s first edition, and hardly any two players are more familiar with each other’s games.

Yet they needed to save a break point before getting to 5-4, when they forced their opening set point. A forehand drive from Federer proved too much for Sock to handle, and he flunked a volley into the net.

It was Nadal who had his serve broken in the second. The point betrayed the fact that his partner’s mobility is not what it was as he missed the volley from Sock’s return, with his legs failing to move in harmony with his arms.

They broke back when Tiafoe was adjudged to have hit a half-volley twice, but in the subsequent tiebreak their blue wall at the net was breached, the formidable American duo taking it 7-2.

It was testament to the occasion that the vast majority stayed for the deciding ‘super’ tiebreak, which began with clock having tolled midnight.

Sock put the World team ahead with an incredible reflex pick-up early on, before Federer levelled it at 7-7 with a superb flicked volley cross court.

Match point was reached when Tiafoe netted and, of course, it fell to the Swiss to serve it out at 9-8, but he was left flailing helplessly at a forehand.

Tiafoe drilled a forehand return to seize the initiative, and the final point of Federer’s career saw him exchange from the baseline before Sock sealed with a huge forehand winner.

Regardless Federer took the deserved ovation at the end, left alone to soak in the rhythmic applause.

This night had been a long time coming, with Federer recalling that thoughts of retirement had first crept into his mind as far back as June 2021.

That was at Wimbledon and it now ends in the city which has seen some of his finest moments, gleaned from eight titles at SW19, the place he can always call home.