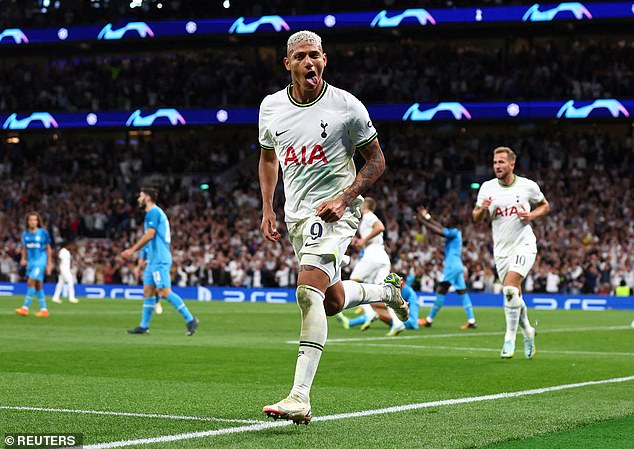 Tottenham boss Antonio Conte is backing fearless Richarlison to thrive in the hostility of his first north London derby, days after the Brazilian forward was targeted by racist abuse in France.

‘You are talking about a player who has no fear,’ said Conte, ahead of Saturday’s short trip to Arsenal.

‘He is a player that in every moment, also during the training sessions, shows great commitment but for sure the first thing I see in him is he has no fear.

‘He is not scared about nobody. Not about the atmosphere, about the noise. He is really strong.

‘On the pitch also with the opponent… it’s difficult to play against him. Because he has no fear.’

Richarlison has proved an instant success at Spurs after his £52million move from Everton.

The 25-year-old scored his first two goals for his new club in a 2-0 win against Marseille in the Champions League last month.

He was also on target with three goals in two games for his country during the international break, in Brazil’s friendlies against Ghana last Friday and Tunisia on Tuesday.

As Richarlison celebrated his goal in the 19th minute against Tunisia in Paris, he was pelted with missiles thrown from the crowd, including a banana.