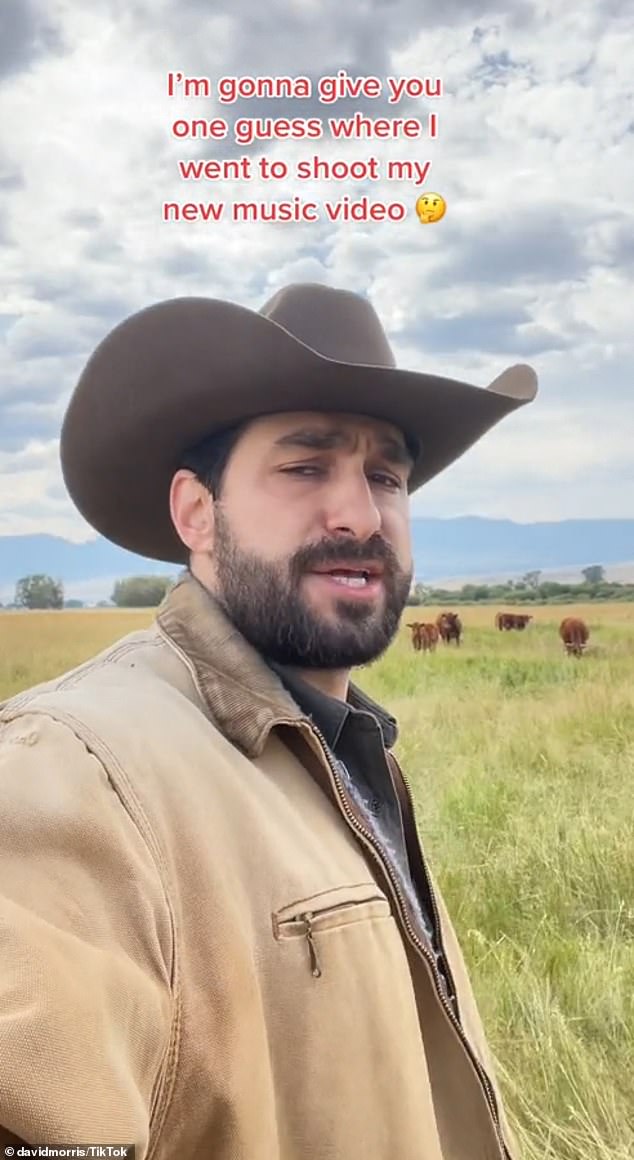 By Ty Roush For Dailymail.Com

A singer who mashes up country music and hip hop has gone viral on TikTok for his new hit song that references anti-woke TV sensation Yellowstone – months after his first hit amassed more than 2 billion views on the social media app.

David Morris, a singer-songwriter from Charleston, West Virginia, released a short clip of his music video for his latest song, ‘Dutton Ranch Freestyle.’

The song references his life in addition to the show ‘Yellowstone’, which stars Kevin Costner and chronicles the lives of the Dutton family who have lived on their Montana ranch since 1883.

‘I’m gonna give you one guess where I went to shoot my new music video,’ text on the video reads.

Morris is then seen dressed as a cowboy walking through a field surrounded by cattle, making it appear as though he is on the Dutton ranch.

The singer-songwriter from Charleston, West Virginia, showed images of himself in an upcoming music video

His last song, ‘Carrying Your Love,’ went viral on TikTok as it was used in over two million videos. Those videos then tallied just over five billion views.

After its success on the app, it was then picked up for widespread radio play and coverage.

His new song ‘Dutton Ranch Freestyle’ most recently reached No. 1 on iTunes’s country charts. He is now represented by Creative Artists Agency, which allows performers to be openly scheduled for events and venues.

‘The greatest honor as an artist is seeing your music resonate with people,’ Morris said. ‘Hearing that a song can comfort someone or inspire someone is the real reward.’

Morris’s success on TikTok has allowed him to be represented by an agency, which advertises various artists to be openly scheduled for events and venues

‘The greatest honor as an artist is seeing your music resonate with people,’ Morris said