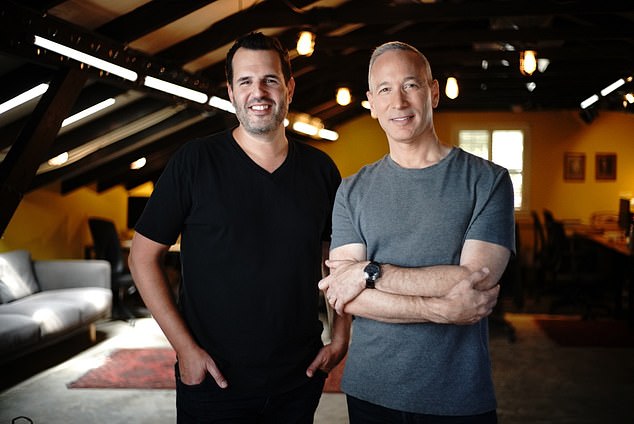 When you think of the insurance industry, digital disruption is probably one of the last things that comes to mind.

The UK insurance industry is the largest in Europe, and the fourth largest in the world, managing almost £1.7trillion, according to figures from the Association of British Insurers. But it has largely been dominated by long-established companies.

Where banks have been pushed to modernise in the image of newcomers such as Monzo and Starling, and pensions have been pulled into the 21st century by the likes of PensionBee, insurance has remained largely untouched.

New entrant: Co-founders Shai Wininberg (left) and Daniel Schreiber had no experience in the insurance industry before launching Lemonade

Now an American-listed company wants to take on the big beasts and shake up the way Britons buy their home, life, motor and pet insurance.

Lemonade launches in the UK this week, and wants to corner the market for younger people buying their first insurance policies with its competitive pricing and AI bots.

It is going into partnership with Aviva to launch its home contents insurance, which includes worldwide coverage for individual personal items of up to £2,000 each and total coverage of up to £100,000.

Chief executive Daniel Schreiber tells This Is Money why he thinks New York-based Lemonade brings something new to the insurance market.

What is Lemonade and how long has it been around?

Where almost all adults in the UK use banks in some way almost daily, insurance is often overlooked.

Just last week the Financial Conduct Authority issued a letter to insurance bosses amid fears people will cancel their policies during the cost-of-living crisis.

The insurance market is huge – it constitutes 11 per cent of GDP worldwide- but it has remained largely unchanged.

A PwC report on the insurance market said there was ‘untapped potential… particularly when compared to some of the dramatic changes seen in the banking industry in the past three to five years.’

The report continued: ‘There is a clear need for more innovation in the insurance industry, driven by increasingly demanding consumers, struggling legacy systems, and an efficient use of ever more available data.’

London-based Marshmallow, set up by twin brothers Alexander and Oliver Kent-Braham, has been a rare example of a firm that is doing things differently.

Other attempts by so-called ‘insurtechs’ to penetrate the market have largely passed the industry by, while the more established players battle legacy systems and the inefficient use of data.

Daniel Schreiber and Shai Wininger launched Lemonade after realising just how badly insurance had lagged behind.

‘Many of the insurance companies we know today were founded in the era of the horse-drawn carriage – and you just wouldn’t build a company for today’s world, the way you did back then’ says Schreiber. ‘Any industry that is huge, unchanged and unloved is ripe for disruption.’

In 2016 Lemonade launched its flagship renters insurance in the US, where it is now among the top products in the market.

It quietly built up a strong base of investors and listed on the New York Stock Exchange during the pandemic, in July 2020. It has since expanded its product range to include pet health, car and term life insurance in the US, while also launching in the Netherlands and in France.

Unlike other tech stocks, shares in Lemonade rallied in August after strong second-quarter earnings as it continued to grow revenue and improve its profitability outlook.

Unlike Anne Boden of challenger bank Starling or Tom Blomfield of Monzo, who spent years working in the finance space, Schreiber and Wininger had little experience of the insurance industry.

Instead they built their careers in the tech and software space, and say they still see Lemonade as a tech company first and foremost.

Schreiber says: ‘We self-describe as a tech company doing insurance, and not the other way around, even though we are a fully regulated insurance carrier.

‘The state of affairs has gone unchallenged for far too long. Entrepreneurs were put off by the voodoo surrounding the complex regulation and capital requirements, but that is now changing.

‘So companies like Lemonade are standing up their own regulated entities, writing on their own paper, developing their own tech, and controlling all aspects of the experience.’

Like other disruptors, Lemonade aims to keep costs as low as possible for its customers with prices starting from £4.

As a result, the sign up and claims processes are largely handled by artificial intelligence bots, rather than a real person on the end of the phone.

Its other bot – ‘AI Jim’ – is available 24/7 and handles claims allowing Lemonade to pay out in seconds.

By using this kind of tech, Lemonade hopes to reach new types of customers and has so far successfully captured a younger demographic. Approximately 70 per cent of its customers are under the age of 35, with about 90 per cent being first-time insurance buyers.

They hope to further solidify their hold of this demographic with its commitment to social impact, something Schreiber thinks is particularly attractive to younger demographics.

As part of its claim to be an insurance company ‘built for the 21st century’ Lemonade, which received its B Corp certification in May 2016, has made sure its business model is sustainable as possible.

Instead of pocketing all of its unclaimed premiums, a lot of the ‘leftovers’ are donated to charities the customer chooses.

This altruistic approach is being spearheaded by the B Corp movement. We have profiled a number of UK B Corps as part of our B Corp series.

But in a cost-of-living crisis, as people reevaluate their outgoings, will people care if their insurance company is sustainable if they can get a better deal elsewhere?

‘Millennials and subsequent generations are the most sustainably-conscious customers to date and prefer to support companies that support a sustainability approach,’ says Schreiber.

If Lemonade can really deliver the sustainability, good service and low prices it promises, it might just be on to a winner.