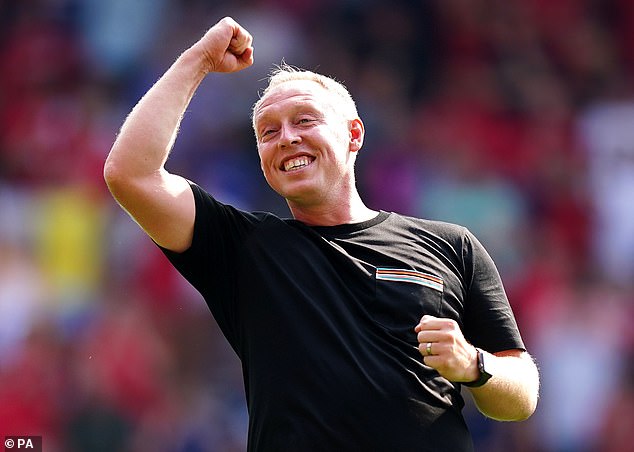 The Welshman has agreed a deal that’ll keep him at the City Ground until 2025 after Forest owner Evangelos Marinakis decided to back his manager, following talks earlier this week.

And after concerns that Cooper may be relieved of his duties – with Forest bottom of the Premier League – fans were quick to praise the ‘fantastic decision’ online.

The new deal for Cooper will be welcomed by supporters, as proven by the response on social media, who chanted his name even as the team were sliding to a fifth consecutive defeat on the Monday prior.

One jubilant fan wrote: ‘Well I was not expecting this but this is the best news!!! Fantastic decision @mil7iadis [Evangelos Marinakis] and co! Exactly what the club needed, solidarity and support for the man who saw us go up! Get in!!!’

‘AMAZING NEWS! Credit the board and ownership for sticking with him, it’s what the fans wanted, consistency and continuity with a manager we know gets the club and believe in,’ another user tweeted.

One Forest fan said: ‘Brilliantly done! Sorely needed. Exactly the right response. Credit to all concerned. Now let’s get the job done’, as he rallied for a turn around in form.

Some users offered shorter reactions to the news, with one writing: ‘Superb news’ with a handful of ‘thumbs up’ emojis added in. ‘I forgive you, I love you all. In Cooper we trust’, another said.

Earlier this week, his role was thought to be under threat along with those of other senior figures at the City Ground, including chief executive Dane Murphy and head of recruitment George Syrianos.

And following the 4-0 defeat at Leicester last Monday – that left Forest bottom of the table – Forest were believed to be sounding out possible replacements for Cooper, including former Liverpool boss Rafael Benitez.

But having assessed the managerial market, Forest owner Marinakis has decided to continue with Cooper, who led Forest to promotion last season despite taking over in September when the club were bottom of the Championship.

Cooper was tasked with the arrival of 23 players since promotion, having spent over £150m this summer, and admitted after the Leicester defeat that he was still trying to mould them into a cohesive unit.

Cooper said: ‘I refuse to be really critical of the players as a group. Don’t want to sound soft and fluffy. That is the last thing I am. It is tough for them.

‘It is a unique situation. Relationships and connections are built over time. We are trying to do that on the job in the hardest league in the world.’