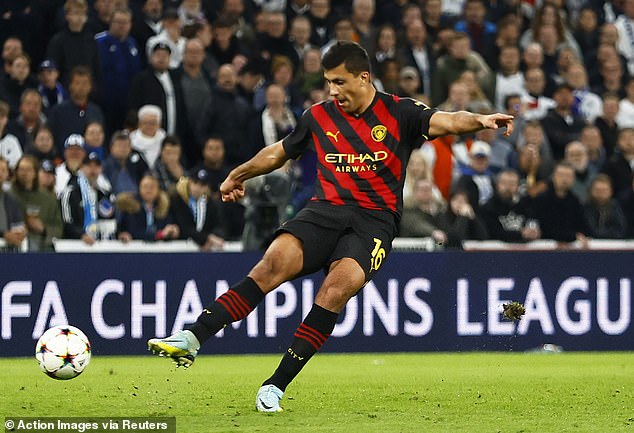 Steve McManaman hit out at VAR after Rodri’s stunning strike in Manchester City’s Champions League clash with Copenhagen was disallowed on Tuesday.

The Spanish midfielder looked like he had given Pep Guardiola’s side the lead in the 11th minute when he fired home a long-range strike.

However, the referee was instructed to check his pitchside monitor, and decided to chalk off the goal after spotting a handball in the build-up by Riyad Mahrez. McManaman, who was on commentary duties for BT Sport, was left bemused by the decision.

However, VAR then determined that Riyad Mahrez had handled the ball in the build-up

‘The world’s gone mad!’ he exclaimed as it became clear the goal was not going to stand due to brushing Mahrez’s hand.

‘Stamenic is going for it, misses it, so you can’t blame Mahrez for [the ball] brushing off his hand, surely not.

Referee Artur Dias watched the incident a number of times before eventually making his final decision.

McManaman suggested that Dias did not want to disallow the goal, but knew he had to by the letter of the law.

‘He looked at it that many times, it was almost as if he wanted the goal to stand because he knew it was ridiculous,’ McManaman added.

BT Sport’s studio guests Peter Crouch and Owen Hargreaves were equally scathing when reviewing the disallowed goal at half time.

‘Nobody’s appealing for it at all. And Rodri’s been robbed of a fantastic goal. If that was me I’d be absolutely fuming,’ Crouch said.

‘That’s one of the best strikes I’ve seen all season, deserved a goal. Dreadful decision from the referee,’ Hargreaves added.

Match of the Day presenter Gary Lineker was also frustrated that Rodri’s goal was not allowed to stand.

‘A stunning goal by Rodri ruled out through the absurdity of the current handball law,’ he wrote on Twitter.

Fans were in agreement with McManaman and co as they slammed the call to rule out Rodri’s strike.

‘I hate VAR. Ruined Rodri’s absolute beauty of a strike. So unfair,’ one fan posted on social media.

‘The most frustrating thing is there is no consistency whatsoever with this new handball rule and VAR.

‘In the space of three days, we have now had: Rodri – goal disallowed. Antonio – goal allowed. Gabriel – no penalty,’ another supporter wrote alongside images of a couple of controversial decisions from last weekend’s Premier League action.

‘Appalling decision by the ref to disallow such a wonderful goal by Rodri. Ridiculous. The game’s gone mad!’ another fan added.

That was not the end of VAR’s involvement in the first half either, as City were awarded a penalty for another handball, which Mahrez missed, before Sergio Gomez was sent off for a professional foul when he was the last man.