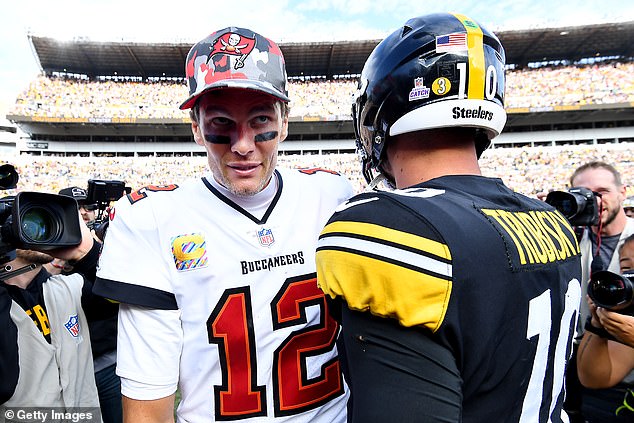 Mitch Trubisky came on for an injured Kenny Pickett to throw a 6-yard touchdown pass in the fourth quarter and the Pittsburgh Steelers’ maligned defense made its stand in a stunning 20-18 win over Tom Brady and the Tampa Bay Buccaneers on Sunday.

The Steelers (2-4) snapped a four-game losing streak by relying on a largely anonymous defense missing almost its entire starting secondary.

Brady struggled to take advantage behind an offensive line that had issues protecting him. The 45-year-old — who at one point excoriated the line for underperforming against a team that had just three sacks in the last four games coming in — completed 25 of 40 passes for 243 yards and an 11-yard touchdown to Leonard Fournette with 4:38 remaining to cut Pittsburgh’s lead to two.

Steelers linebacker Devin Bush broke up the two-point conversion attempt and Pittsburgh ran out the clock behind Trubisky to avoid its first 1-5 start since 1988.

Trubisky, benched in favor of Pickett at halftime of an Oct. 2 loss to the New York Jets, passed for 144 yards and the touchdown to Chase Claypool, the first scoring grab a Pittsburgh wide receiver this season.

Trubisky connected with Claypool again for a 26-yard gain on the Steelers’ final drive and then ran for a 9-yard gain that finished off Tampa Bay.

The victory came with a potentially high cost. Pickett, the 20th overall pick in the draft, entered the NFL’s concussion protocol after being pushed legally to the ground by Tampa Bay linebacker Devin White shortly after throwing a pass.

Pickett lay still on the Acrisure Stadium turf for several seconds before getting up. Officials waved the Steelers’ training staff onto the field and Pickett sat down briefly before making his way to the medical tent and eventually the locker room.

Enter Trubisky, who lost the starting job to Pickett at halftime of a loss to the New York Jets on Oct. 2 but remained one of the team’s captains, a testament to how he’s handled the demotion.

Pickett’s status going forward is uncertain. Trubisky’s steady play — which was largely absent during his 3 1/2-game stint as the starter — was good enough for the Steelers to beat Brady for just the fourth time in 16 tries.

Meanwhile, Tampa Bay not only suffered in the win-loss column, and saw their tight end stocks receive a big blow.

Tight end Cameron Brate left on a stretcher late in the third quarter after getting tackled by Pittsburgh linebacker Myles Jack following a 6-yard catch.

Brate was able to move all of his extremities, giving a thumbs up to his teammates as he was carted to the locker room.

Next, Pittsburgh travel south to face Miami on Sunday Night Football, while Brady and the Bucs will look to rebound in Charlotte vs. Carolina.

Re-live all the action in the Steelers-Bucs, and other 1pm games, as it happened in DailyMail.com’s live blog.