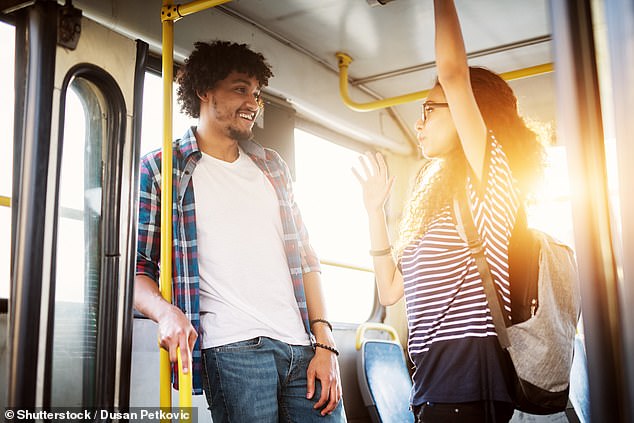 Feeling down? Chat to a STRANGER! People who talk to unfamiliar individuals as well as friends and family are happiest, study suggests

By Xantha Leatham Deputy Science Editor For The Daily Mail

You might think it’s enough to have a good group of family and friends around you.

But it’s also important to chat to strangers on your commute and co-workers in the office, a study suggests.

Researchers have discovered that people with a diverse set of relationship types are happier than those who don’t try to branch out.

You might think it’s enough to have a good group of family and friends around you. But it’s also important to chat to strangers on your commute (stock image) and co-workers in the office, a study suggests

Last year, researchers from the University of Chicago conducted a series of experiments in which volunteers engaged in both shallow and more involved conversations.

They found that people often avoid forging deeper connections because they underestimate how interesting other people will find what they have to say.

However, deep meaningful conversations were found to be less awkward, and more enjoyable than small talk.

A team from Harvard University calculated the ‘social portfolio’ of more than 50,000 people from eight countries.

Analysis showed those who interacted with a wider range of people reported greater wellbeing, life satisfaction and quality of life.

Speaking to a broader range of people was more important for wellbeing than the time spent on each interaction, or the total number of interactions, they found.

And having a diverse social portfolio was an even better predictor of happiness than being married, they discovered.

The authors said: ‘Different types of social support – for example emotional, instrumental, financial and informational – tend to be provided by different social relations, for example your partner, immediate kin, friends or colleagues.

‘Diversity in social portfolios may be associated with greater access to different types of social support, resulting in enhanced well-being.’

Writing in the journal PNAS, the researchers said: ‘In fact, recent work suggests that individuals discuss important topics with their weak ties more often than traditional network theory would predict – especially in one-on-one conversation when relational stakes are lower.

‘At the network level, weak ties play a critical role in bolstering one’s network, by serving as bridges that provide access to information and resources.

‘People’s time is scarce, such that increasing the number of frequency of social interactions can prove challenging.

‘Our results suggest that a more relationally diverse social portfolio may offer a time-neutral means of shaping wellbeing.’

Previous research revealed 27 per cent of Londoners would feel uncomfortable if a stranger started talking to them.

This is almost twice as high as in the North, where just 15 per cent of people said they would feel uncomfortable.

BEING GENEROUS ‘REALLY DOES MAKE YOU HAPPY’, STUDY FINDS

Being generous really does make people happier, according to research in 2017 from an international team of experts.

A group of 50 volunteers in Switzerland took part in a spending experiment, with each given 25 Swiss Francs (£20/$25) per week for four weeks.

As part of the experiment, participants performed an independent decision-making task, in which they could behave more or less generously while brain activity was measured using functional magnetic resonance imaging (fMRI).

They were asked to choose to give between three and 25 francs of their money as a present to a recipient different from those previously chosen.

The researchers found that participants who had committed to spending their endowment on others behaved more generously in the decision-making task.

They also discovered greater self-reported increases in happiness as compared to the control group.

The full results were published in the journal Nature Communications.