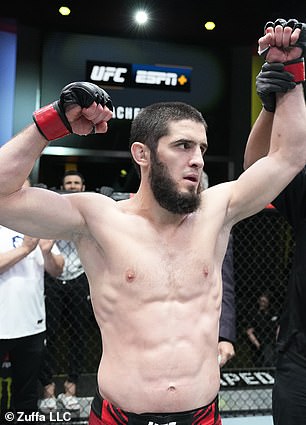 ‘He’s going to ride him like you ride your horse’: Former champion Khabib Nurmagomedov claims Charles Oliveira doesn’t have good ‘ground game’ and Islam Makhachev will punish him at UFC 280

Oliveira and Makhachev are set to lock horns when they meet at UFC 280 on Saturday night at Etihad Arena in Abu Dhabi for the vacant lightweight title.

Nurmagomedov will be in Makhachev’s corner and has already predicted how the intriguing matchup will pan out.

He says Oliveira’s lack of ‘ground game’ will be his downfall and his team-mate will come out on top, insisting previous fights prove his point.

‘This is what Islam is gonna do with Charles Oliveira: he’s gonna ride him, how you ride your horse. Save this video because a lot of people underestimate Islam,’ Nurmagomedov saidin a recent video.

Oliveira has been defeated eight times throughout his 12-year UFC career, but only three of those have come via submission.

His last submission loss came in November 2016 against Anthony Pettis, with the other two coming against Jim Miller kneebar in 2010 and in 2016 again in the hands of Ricardo Lamas.

Since his last submission defeat, Oliviera has submitted eight different opponents, including his last two, Justin Gaethje and Dustin Poirier.

Meanwhile, Makhachev has lost just one of his 23 bouts and that came Adriano Martins by knockout in 2015.

Similar to Oliveira, three of his last four victories have come by submission, against Drew Dober, Thiago Moises and Dan Hooker.