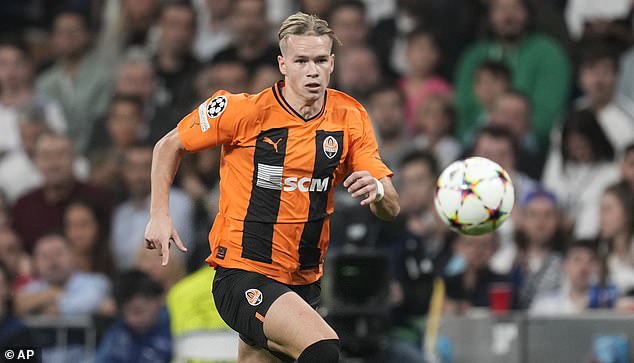 Arsenal ‘lead race to sign Ukrainian star Mykhaylo Mudryk’ but face competition from Roma, who have already had bid rejected for the Shaktah Donetsk winger as the Ukrainians ‘put £40million price tag on his head’

Arsenal are leading the race to sign Shaktah Donetsk winger Mykhaylo Mudryk but face competition from Serie A side Roma.

The 21-year-old is one of the biggest emerging talents in the Ukrainian football and was the star of the show in Donetsk’s Champions League game against Real Madrid last season – where he was applauded off the pitch by the home fans.

This term the tricky winger has played six times for Shaktah and scored twice, including a man of the match display in their 4-1 Champions League victory over RB Leipzig.

The Gunners were linked with Mudryk in the summer and some reports had claimed that he’d agreed personal terms with the club, only for the deal to fall through as a price between the two clubs couldn’t be agreed.

Now according to Fichajes.net, Arsenal could be back in for the left-footed star as Mikel Arteta’s looks to continue to add more quality to his squad.

The current Premier League Leaders may face competition for his signature though, from Jose Mourinho’s Roma.

A bid of around £25million has already reportedly been offered for the Ukrainian, but Shaktah are holding out for a fee nearer the £40million mark and rejected the offer from the Italian club.

That price tag may not put off Arsenal and the north London side could be back in for their target, especially as last month Mudryk admitted wanting a move to the Premier League and was excited by Arsenal as a destination.

Talking to CBS Sports he said: ‘My dream is to play in the Premier League, of course.

‘Arsenal is a very good team, very good manager. So from my side, I can’t say no to Arsenal!’

Mudryk’s desire to move to The Emirates is more good news for Arsenal, who have enjoyed an impressive start to the season with 10 wins from their eleven games played.

They lead the Premier League table four points clear of champions Manchester City and have already progressed to the knockout stages of the Europa League.