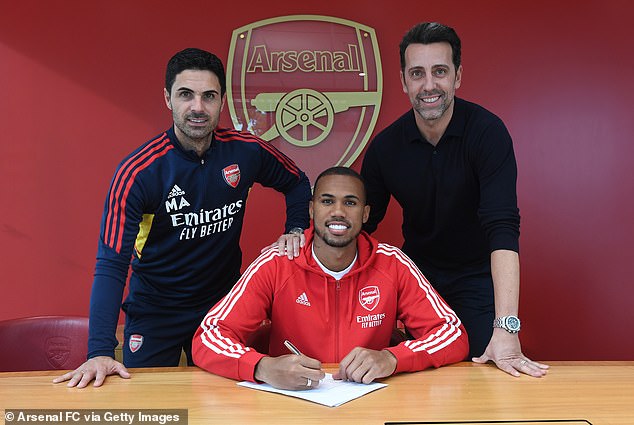 By Daniel Matthews For Mailonline

Gabriel Magalhaes has signed a new, long-term contract with Arsenal.

It is understood the central defender finalised terms on Friday, following a meeting between manager Mikel Arteta and his representatives.

Arsenal hope it will be the first of a flurry of contract extensions involving key players, with the club working to tie down Bukayo Saka, William Saliba and Gabriel Martinelli, too.

Arsenal have secured the long-term future of centre back Gabriel Magalhaes (pictured, centre)

Magalhaes has started every Premier League game this season, forming a promising partnership with Saliba.

Only Newcastle have conceded fewer league goals than Arsenal (10), who sit four points clear atop the table.

The Brazilian, 24, joined from Lille for £27million back in 2020. His previous deal ran until the summer of 2025 but Arteta has now secured his long-term future.

Gabriel has made 83 appearances for Arsenal and on Friday Arteta praised the defender.

‘A winning team needs to have a spine of the team that is tremendously consistent and play at a really high level, keep clean sheets and we are doing that a lot,’ he said, ahead of Sunday’s trip to Southampton.

‘When we look at a central defender we look at partnerships. I think Gabby has made William a better player and I think Willy helps Gabby to be the same – there is a strong chemistry there, you can sense it and the way they communicate with each other and play for each other, it is really positive and what you want.’

Gabriel has been guilty of a couple of mistakes this season and Arteta conceded: ‘If you look at some of the goals we have conceded there have been some individual errors in some of them but they have been shared.

‘We have to accept that when you have young players in those positions, this is going to happen and that is the bill.’