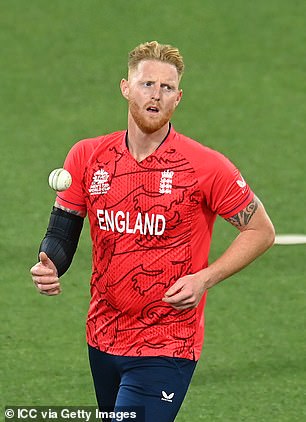 Ben Stokes has taken aim at the ICC ahead of Saturday’s start of the Twenty20 World Cup by branding the ‘Toblerone’ foam boundary markers ‘stupid.’

The markers, 20 centimetres high and crammed with advertisements, cost England one of their best bowlers this week in Reece Topley, who tripped over one in Brisbane taking catches in practice and seriously damaged his ankle.

‘It’s stupid,’ said England’s Test captain, who will probably open the bowling against Afghanistan on Saturday in Topley’s place and bat No 4 for Jos Buttler’s white-ball side.

The boundary markers are 20 centimetres high and crammed with advertisements

‘Unfortunately it’s taken one of our bowlers to be ruled out of the World Cup (to make people notice them).

‘I’m pretty sure it’s something they can look at but you know what it’s like – everybody wants to get their names on somewhere.

‘But you look at player safety and the fact Reece has stood on it and it’s ruptured ligaments and he’s out of the World Cup. It should be looked at.’

Sportsmail understand ICC have no plans to replace the lucrative markers, nicknamed ‘Toblerone’ because of their shape, because they’ve never caused an issue in the past.

Also, England have no plans to officially complain despite Stokes reflecting their feelings on them.